Is TPG a Bad Guy?

If you haven’t read this piece in Business Insider about Brian Kelly, aka “The Points Guy” or “TPG” as many call him, you may want to check it out.  It’s been out for awhile, but many in the points, miles and travel space haven’t read it yet.  If you don’t have access to Business Insider, there’s also this link.  The article is interesting for a variety of reasons, but partly because TPG is and advertising partner of Business Insider, which means it’s likely not in the company’s interest to paint a negative picture with a hit-job type piece.

As some personal background, I started collecting points and miles many years ago after hearing an interview that Brian gave on a local radio station in my area.  He didn’t give out a lot of specifics in the interview, but it revolved around travel and reducing the costs, so it caught my attention.  I did my research for a few months then dove in pretty intently and haven’t looked back since.  But I’m grateful for hearing that interview, so indirectly I owe Brian some thanks for being a catalyst for my involvement in the travel rewards space.  Thanks Brian.

I should say before I go on that I’ve never met Brian Kelly.  I saw him briefly walking towards the exit at my first Chicago Seminars back in 2013.  He apparently came in to give a few minute speech and left.  I remember thinking it seemed very odd that he would come to an event like the Chicago Seminars, which is filled with his target audience, and leave so soon.  Some people at the seminar were kind of irritated that he bolted out the door so quickly.  I remember not caring, just thinking it was odd.  I also remember he was much taller than I thought, and dressed kind of strangely.  His garb looked expensive, but also unusual or even odd.

In the article, Brian is accused of sexual harrassment, drug use, and basically being a bad guy.  Here’s a few notable quotes from the piece:

“Business Insider spoke with 28 current and former employees, freelancers, and contractors, 23 of whom described a toxic work environment they said was fostered by Kelly……Some ex-employees describe Kelly’s treatment of his staffers as condescending, rude, and unprofessional.”

“…the reality of working alongside the 37-year-old travel guru can be a nightmare, according to a number of former and current employees with whom we spoke.  Multiple sources described Kelly, who was also known for his generosity, as having a quick temper. Some say Kelly subjected them to verbal abuse and berated them in public Slack channels. In one case, a freelance producer claimed Kelly made an inappropriate sexual advance during a trip to Costa Rica. The CEO’s splurges — like a $50,000 personal-security bill for a work trip to Israel — became a concern for TPG’s parent company, Red Ventures, according to a former editorial employee.”

TPG doesn’t own his website anymore, that was sold to Bankrate.com (later acquired by Red Ventures in 2017).  According to the article TPG’s website generated more than $50 million in profit last year.”  I’ve heard that as part of the sale of thepointsguy, Brian was to receive the reward points for hotel stays by all TPG employees.  I think those points are via hotels.com, but again, I don’t have confirmation on that.  Brian Kelly still looks to be CEO at TPG (https://thepointsguy.com/author/the-points-guy/), and also hosts a podcast called The Talking Points, which has great audio quality but seems to be more of a platform for travel and finance CEO’s to promote themselves than hard core points talk.  It’s a show that lost me from the beginning.  Brian announced a $5,000 donation to a charity Matt Kepnes runs on a recent episode too, so that was nice.

When Drew MacComber went to work at TPG I was very surprised.  I interviewed Drew on podcast #14 of my podcast (The Travel Points Podcast), and at the end of the interview, asked if he’d been contacted by any of the big blogs about working for them.  A few weeks later his website was purchased and he went to work for TPG.  In the interview, Drew kind of paused after I asked him if he had been contacted about working for one of the big blogs, and I assume that pending relationship was why.  I was saddened to see Drew go to TPG, as his blog is growing cobwebs now but was one of the best, most unique and interesting points and miles blogs out there.

I’m not writing any of this from ill will towards Brian or TPG.  I don’t know that much about either.  TPG isn’t a resource I have spent much time using.  The constant barrage of credit card adverts is too much for me to deal with, and the content is often written by young people I don’t know or trust.  The site seems to cater to intro to medium experienced points enthusiasts.  That’s totally fine, as there needs to be resources for everyone, it just doesn’t appeal to me very much.  As a bigger issue though, TPG’s ties with big banks and “advertising partners” is way too tight for me, and I just don’t trust it as being independent.  I’m not saying their information is false, it’s just not a resource I value much.  Some do and that’s fine for them.

I don’t doubt that Brian is an interesting guy.  I’d guess for many who first meet him he’s probably very engaging and even magnetic.  I imagine that he has many interesting stories about his life path, his former company TPG, and travel.  But outside of that he seems like a pretty empty guy, like he’s chasing fame, and the article seems to paint that picture quite clearly.  The author of the piece also spoke with many current and former TPG employees, and doesn’t appear to have malice as the intention.  I believe the piece is accurate, but that’s for you to decide on your own.  It’s interesting that he still has a prominent role with TPG even after he sold his company.  That prominent relationship could be a public relations time bomb waiting to explode.  However, to cut out the founder of the company at this stage would be seemingly be very difficult. 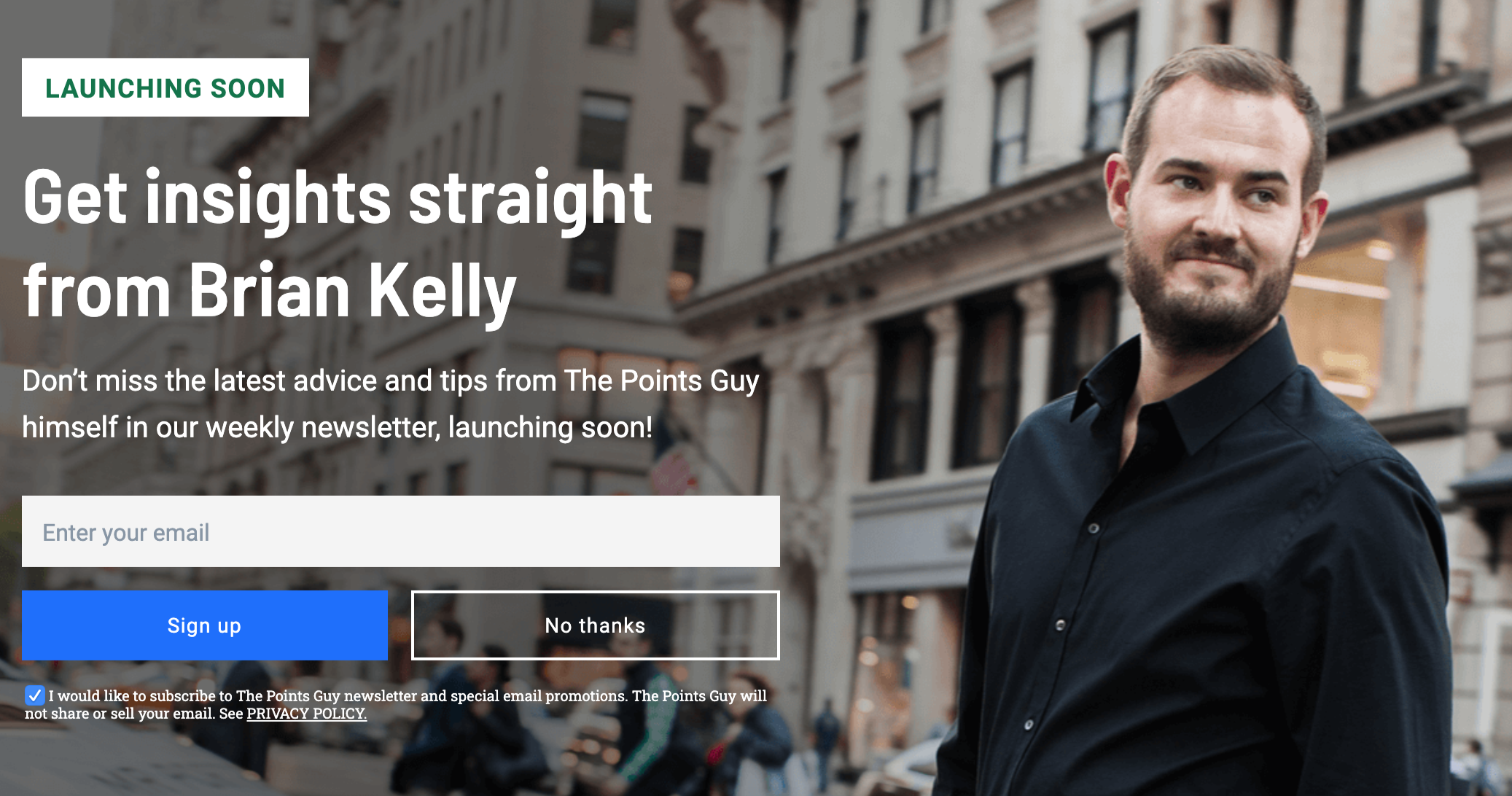 Screenshot of Brian Kelly in a recent photo from the TPG website; still a prominent feature of The Points Guy despite selling his blog to a large, outside company.

The points world is an interesting place.  I met Rene, originally from Deltapoints (later changed to renespoints) at a dinner years ago in Minneapolis.  I shook his hand and asked him who he was, as I had no idea and didn’t read his blog.  He said “Oh, I own a small little blog…”, and seemed very happy with himself.  To me, the guy seemed full of himself, and kind of a pompous ass.  I only have that dinner experience with him, so it’s possible I’m wrong there, but I wouldn’t bet on it.

Last summer Greg and Nick from FrequentMiler hosted a Minneapolis presentation.  They both generally have a solid reputation in the points and miles world.  Greg arrived in Minneapolis the night before and I invited him out with some local points people for beers and a look at the city before the presentation the next day.  Our group picked him up from his hotel and drove him out to a notable and large, mostly outdoor bar in Minneapolis.  I bought one of the round of drinks and ended up driving him back to his hotel.  The next day after the presentation was over, many in attendance had dinner.  I drove Nick and Greg to the dinner from the presentation.  At the dinner I even gave Greg and Nick a local MS tip.  One of the gals at the table asked me why Greg hasn’t been on my podcast.  I was sitting close to Greg and jokingly said, “well I’m trying to get him on my podcast, but it’s kind of a tough sell”.  Greg heard that and said, “Get Nick to do it” without any elaboration.  That was an interesting response.  I felt like I had gone out of my way to make their stay and time with our points group positive.  That response was very unimpressive and to be honest, pretty callous.

On the flip side there are others in the points world that have been great.  Stefan Krasowski from RapidTravelChai is a great guy, extremely bright, and has a wealth of knowledge in this space that few have.  Randy Petersen, who is kind of the godfather of points and miles, was an absolute delight to meet and speak with.  Such a humble guy who cares about people, inside and out of his blogging network BoardingArea.  It was a big thrill to spend time with Randy.  Drew and his wife Caroline from Travel Is Free are really sweet, genuine, and interesting people.  Steven, one of the owners at Notiflyr, a great cheap flights website, is a top guy.  Just as genuine as they come, and wicked smart as they say out East.  John Klukas from TheFlyingMustache has been a friend too, and besides having great skills with redeeming points and miles for flights, has a solid photo background.  Even guys that I don’t know well like Howie Rappaport from FrugalTravelGuy and Shawn Coomer from Miles to Memories, have stood out in my conversations with them at national points events.  Both really bright guys that I respect a lot in this space.

In the end, I’m fairly agnostic about if Brian Kelly is a good guy or not.  Frankly I don’t really care if he is.    I posted this piece and link to the article so that those who haven’t read it could make their own judgements.  Enjoy –