Trips are usually fun, but are becoming bad luck for me.  A few months ago I was shutdown by Bank of America during my round the world trip overseas and came home to find snail mail closure notifications.  This time, I took a 5 day domestic trip and the morning after returning, wasn’t able to login to my Citibank account the next morning.  After creating a new password I was able to login where it was pretty easy to tell what happened: 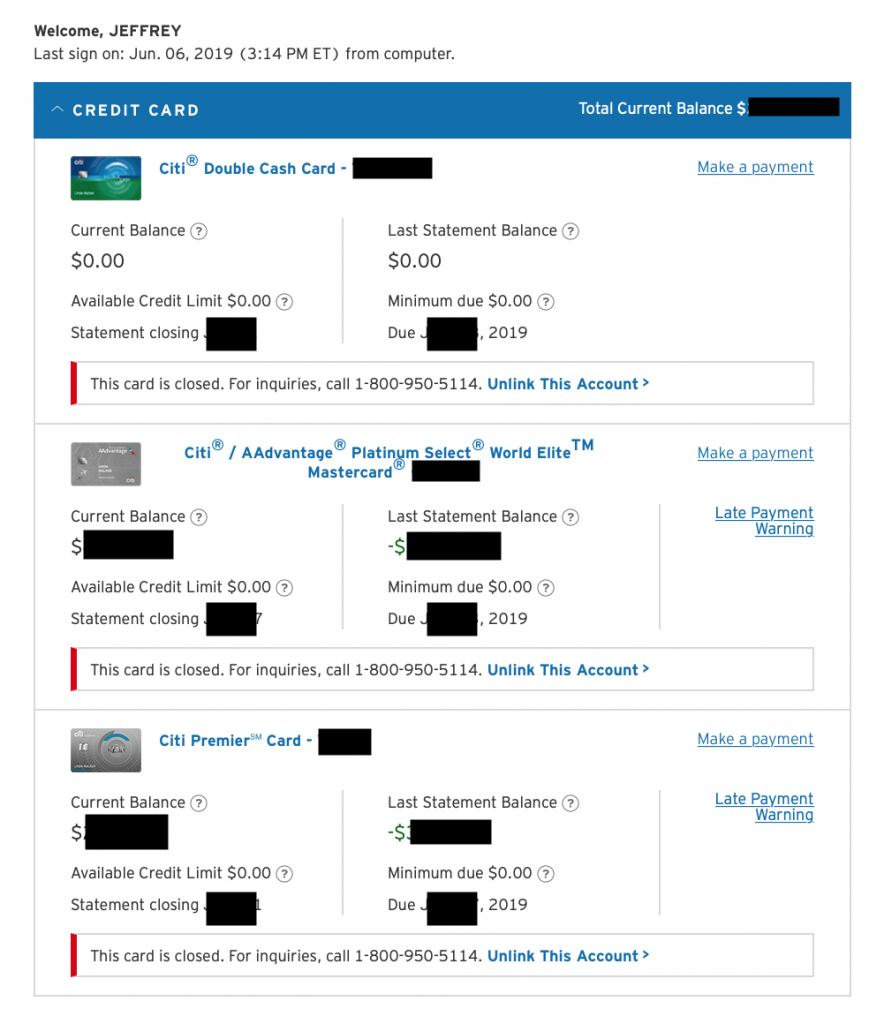 Waking up to $0 available credit on all my accounts wasn’t a good start to the day!

What’s a little odd is that I wasn’t given any notice of the shutdown. Apparently the same day of the closure, I was sent a letter informing me of what was happening.  I haven’t received that letter, but I’m guessing I will soon.

Because of the shutdown, I’m not able to access my rewards, or roughly $400 or so in cashback for the previous month, well over 100,000 Thank You Points, and over 10,000 American Airlines miles that likely won’t be sent to my account.  From other people’s Citi shutdown experiences, apparently you have access to rewards within the same day (or within 24 hours) of the shutdown, however I obviously can’t confirm that, as I don’t have any access and am not exactly sure when the shutdown occurred.  When I was on my trip, I didn’t logon to my Citibank account for any of the 5 days I was traveling.

The Bank of America shutdown wasn’t all that surprising, but the timing was peculiar.  I used the Alaska personal and business cards almost exclusively to generate points via manufactured spend (MS), and also did some (credit line) cycling on the cards, but the amounts depended on the month.  I also did bill pay to each card which was likely the nail in the coffin.  But my efforts were pretty consistent and not exactly hidden.

“Everything is fine, until it isn’t” – anonymous heavy hitting MSer

With Citi though, why I was shutdown isn’t that much of a mystery.  The only question I have is why now?  Most of the shutdown arrows probably point to credit cycling my Citi Double Cash.  My credit line was small, and since the beginning of the year, here’s my monthly cycling thus far for 2019:

The Double Cash cycling from the last half of the previous year are similar to these numbers too, yet shutdown has been avoided until now.  However, I didn’t cycle any of my other Citi cards, which probably means very little.  If one card is targeted with Citi, they all will suffer.  I also did monthly bill pay on all of my Citi cards, or $40k per month total without much variation.  For years I didn’t want anything to do with bill pay, then over the past 2 years, started putting it into play.  Things were fine, then all of a sudden, they weren’t.

I plan to call Citibank and inquire about why my accounts are closed.  I assume that call will go nowhere, and will likely be told to wait for a letter that will also offer no specific explanation.  After that I’ll likely file a CFBP, which I also assume will not produce any meaningful results.  I have heard of people having (financial) success against Citi with legal action, which is likely the path that I’ll take too.  I have mapped out my points earning strategy for the next 12+ months and some of that was linked with Citibank.  I’d planned to convert my personal American Airlines card into another Double Cash card, this time with a substantially higher credit limit.  The Premier was a long term and steady play for me, which would also get reasonable spend but that was very targeted (and specific) spend to maximize rewards.  Fortunately though, Citibank will only middle affect my rewards path in the coming year.

I used to be very cautious with my rewards credit cards and related accounts.  I would joke with friends that I was going to start a points blog called “Paranoid Points” that talked about shutdowns and fears related to it, as the thought of having accounts ended for me was pure dread.  Now it’s something that I completely expect based on my activity.  That’s not to say that my activity hasn’t been on the aggressive or even reckless side of things, I don’t think there’s any question about that.  Heck a few accounts that are still alive could easily be shutdown tomorrow for similar patterns.

Now I’ve been shutdown by Barclays, Bank of America, and Citibank.  I’m not sure which one I value the most, but while each is significant, none of them are end blows for me.  It’s kind of like the death of a million small cuts, although here it’s more like big cuts, as there are only so many banks providing top tier rewards cards.  However, the ship, carried by the winds of MS, can and will keep sailing until the boat can’t make it anymore.

My MS volume has been pretty high this year, and with that said, the tight rope gets raised and the safety net is removed.  I’ve always felt the slower, and lower volume, points grind is probably my best path, as organization is my weak point, but for the time have made a harder push for rewards.  That path has created consequences that I’m dealing with now.  Having months of credit cycling and easy bill pay with Citi created an calming effect, as though the bank didn’t care about either aspect.  Well they do.  I also thought that my small credit line somehow let me slip under the shutdown radar. That somehow the lions didn’t notice (or care about) the little mouse nibbling on the grass.  Well they found me.  Don’t be fooled though, they can find you too.

I called Citibank 3x today.  The first representative was in Asia and her English wasn’t great, however she did say that the reason for the shutdown was because of money laundering risk.  Second call confirmed that reason, and I was told to call Equifax, as that company was apparently the one who sent the money laundering information to Citi.  I called Equifax and nothing in my account was unusual, all accounts were up to date and current.  No issues.  Further, Equifax had no idea why Citibank would say that Equifax would send that kind of information, when in reality it’s the bank who sends the credit bureau the information each month.  Called Citi one last time and was told the accounts were closed, all rewards are forfeited, and wasn’t given a reason.  Hopes to rescue the account are being extinguished quickly.