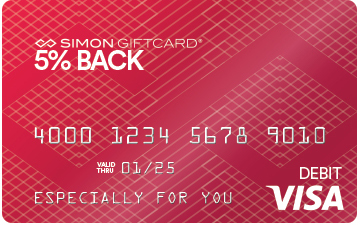 Just like the saying states, “All good things come to an end”.  The Simon mall 5backs are on their way out.  Today the load limits change on Simon’s 5% back Visa debit (gift) cards.  Earlier this week Simon corporate sent out a memo: 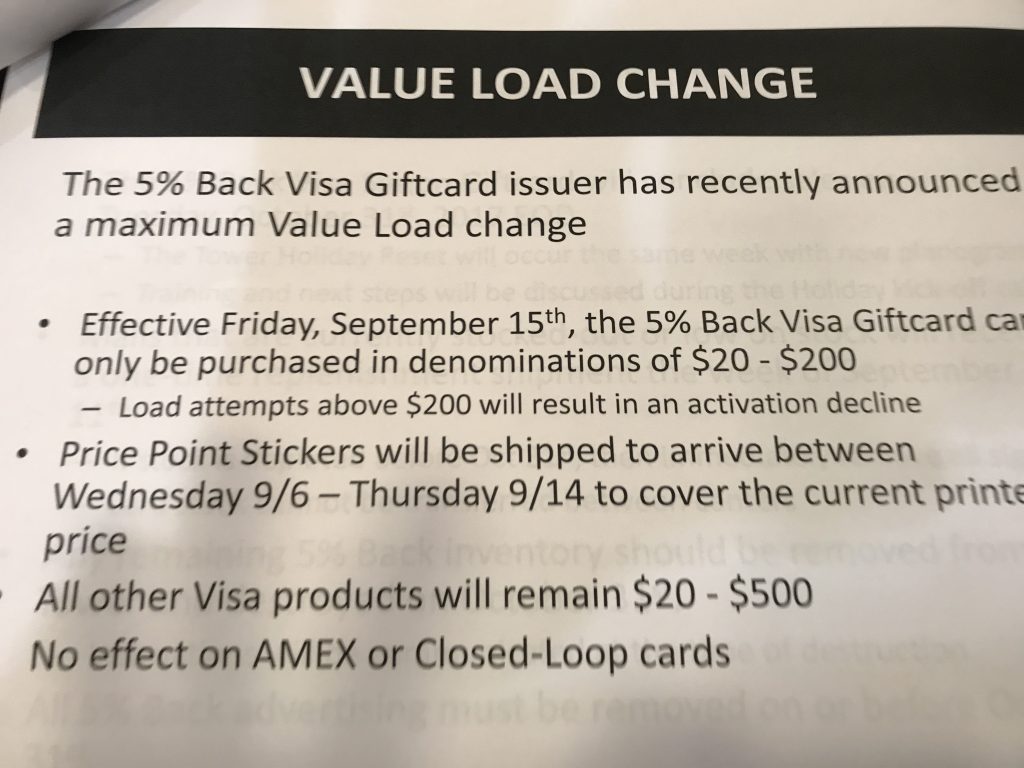 The reason for the load change to the 5backs?  Retailers were taking it in the shorts.  People engaged in manufactured spending found loopholes in the 5back program, using the money given by the stores committed to the program to make money in various ways.   Some of those ways were simple, others were more complex, and the profit varied from deal to deal.  Generally manufactured spend results in either points or profit.  The Simon 5back program offered a unique opportunity:  profit and points.

Interestingly enough, the Simon memo hints at a new product that might be introduced in the fall.  The 5back program was expensive for many of the companies that signed up for it, so if a new product is introduced, they will likely be quite different than the products that original cards.  Simon is well aware of manufactured spending within its customer base, but the company wasn’t prepared for its 5back program to be affected as much as it was. 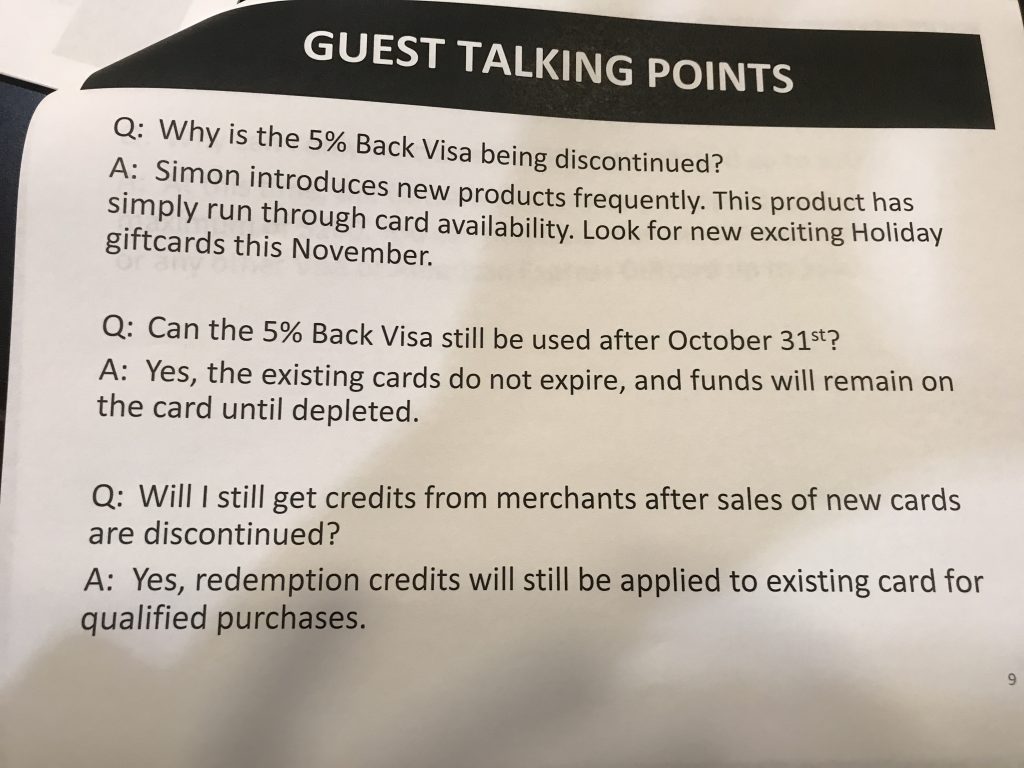 On November 1st, all 5backs will officially go away.  The good news is that after November 1st, regular Visa debit (gift) cards will still available and in the same denominations and limits. 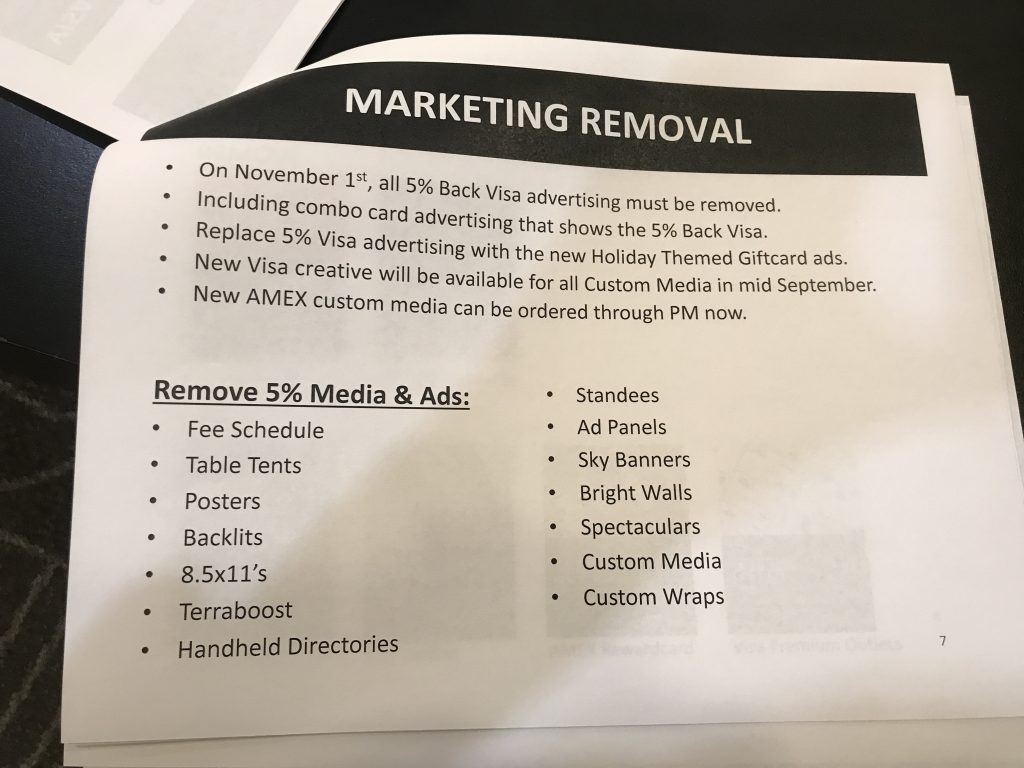 I called Simon corporate several months ago to try and get a guy banned who lives in my area from buying cards from any of their malls.  He’s a guy who has intentionally broken the law in different ways and at different stores.  Locally, one Simon mall has actually had the courage to temporarily ban him, but others sellers and stores haven’t had the courage to do what’s right.  My call to Simon was returned around 3 weeks after my initial call, and I spoke with one of the corporate higher ups about my issue.

On the call the woman I talked with sounded a little annoyed.  She said she that didn’t normally answer calls like this, and that a person beneath her who does and who wasn’t in the office.  When I explained the situation about a rogue manufactured spender in my area, she didn’t seem to care much.  “Manufactured spending?”, she said, “we know all about that”.  She continued with a condescending tone….”If he’s breaking the law, that’s the store’s fault, not ours” she said.  To top it all off she told said, “Trust me, I know way more about manufactured spending than you do”.  I was surprised at her statement and told her that I doubted that it was true, but thanked her for her honesty.  The bad MSer in my area continues to operate.  He’s a cancer in the points and miles world.

In the end, stores fled from the 5back program and it imploded, basically collapsing on itself.  Some stores lost large sums of money to manufactured spenders who took advantage of the 5back program.  Some of the figures that were achieved and the various schemes associated with them are near legendary.  With that said, since MSers were able to demolish the 5back program that was managed by Simon, I guess executive that I spoke with didn’t know as much about manufactured spending as she thought.