Another bank shutdown happened last week related to money order deposits from manufactured spend.  This time it was BMO Harris.  What’s kind of weird about the shutdown is that I’ve had the account for under 2 years now, and received a call from their risk department in Wisconsin several months after opening the account.  He asked questions about my money order deposits to which I answered fully, explaining how and why I get them and the general process that’s involved in manufactured spend for reward points.  He understood what I was saying, and I offered my website as sort of proof for my explanation.  He declined and said that my explanation was enough.

Then about a month ago, or roughly a little over a year after my initial call from BMO’s risk department, I got another call from the same department.  This time though, the person gave little information about himself and from the vagueness of the call, I thought it was a scam.  Even people at the branch that I visited later that day said it was a scam.  But after another call and a follow up by me to BMO, I found out the call was real.  The BMO employee said he was just asking some “routine” questions about my business that were needed by the IRS.  That also seemed odd, but I obliged him and answered his questions. 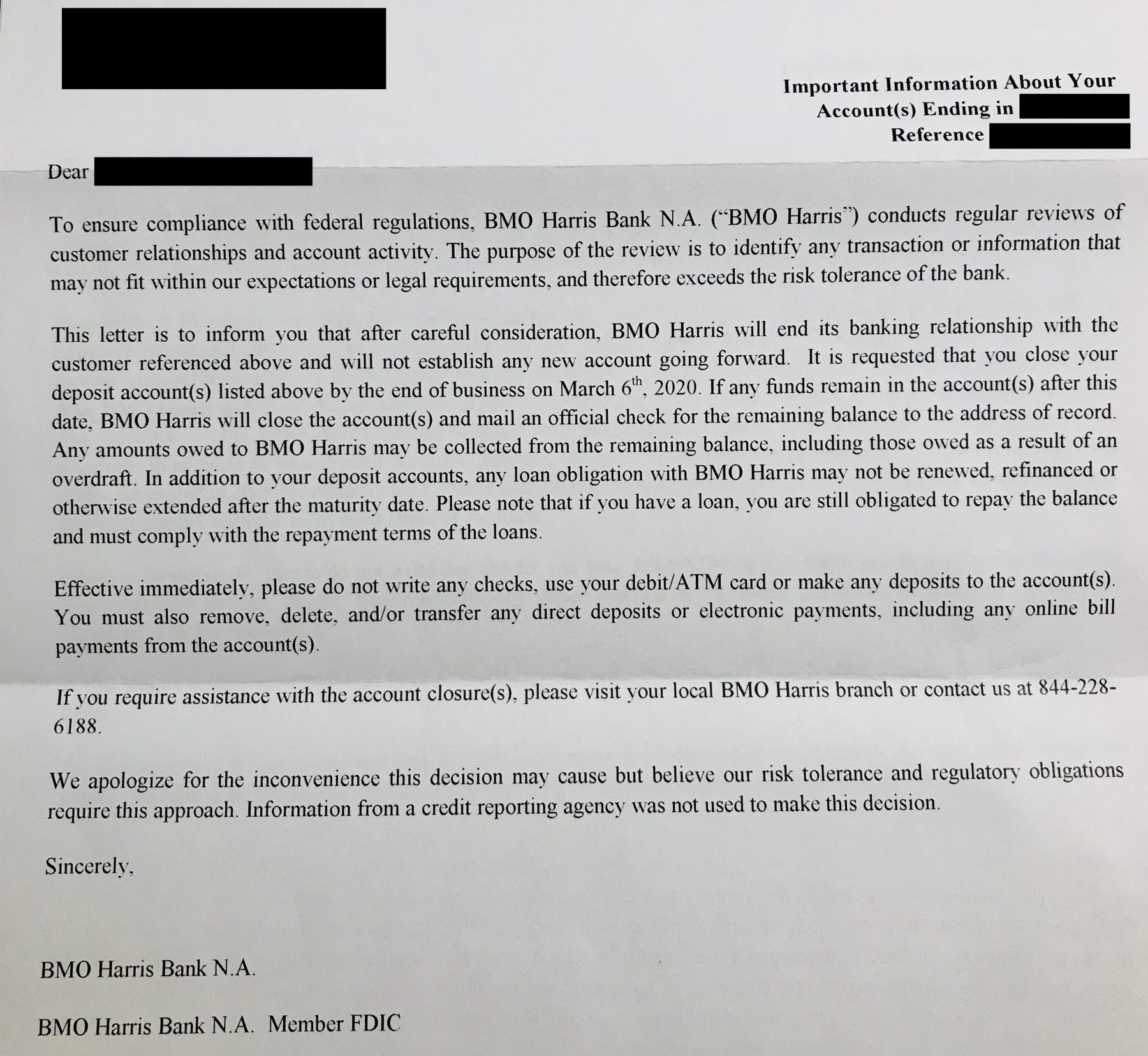 I asked the BMO Harris “risk manager” on my most recent call specific reasons for why I was shutdown.  He said that I was a “risky customer”.  I corrected him, and said that I’m actually a very un-risky customer, as I keep $5k – $10k in the account at all times, pay off all my bills on time, and have never had a bad mark on my account.  He then said that they money order activity was a “risk” for BMO and said that was why they were terminating my relationship.  He didn’t seem in the account reversal type of mood, so I let it go.

I’m not doing as much traditional manufactured spend (MS) via money orders as I have been in the past few years.  Some of that is due to new rules that limit money orders at stores that I visit, but I’ve also made a move to diversify my points earning away from MS.  My market is saturated with MSers running cards which has basically ruined a good city for earning outsized points.  The supermarkets are all but dead here, and the Walmarts almost unrecognizable to what they were a year or so ago.

That implosion could be in part from this blog, and me writing, even casually, about manufactured spend.  I think it’s a very small contributor, but I’m guessing it may have played a small part.  Social media along with the Simon Mall increased daily limits of $25,000 and reduced fees ($3.95 per $1,000 card) are likely the main contributors along with people abusing stores, which I’ve seen first hand lately.  Whatever the reason, traditional money order MS isn’t very good here any more, and thankfully it’s becoming less of a priority for me.

My BMO account closure is about as big of a factor for me as the socks that I wore yesterday.  Even if they have holes in them and become useless, as this relationship has, I have more, and better choices, to choose from.  I didn’t value BMO as a serious financial resource, and used it solely for MS deposits and transactions.  I had no plans on any other banking with BMO, and only viewed the bank as a possibility for churning the checking account bonuses offered each year.

And so we part ways.  No biggie, as I’ve already moved on.  The only pause that I had was when to actually close the account and take the remaining money out.  The lesson learned here is that when you’re questioned about money order deposits, or your accounts with a bank for any sort of unusual or suspicious activity, you’re likely in the crosshairs.  That of course depends on the bank/credit union, and also who you deal with.  However as a general rule, I think it’s true.  I considered closing my BMO account after my 2nd call with risk management, but didn’t because my account remained open after my first call with someone from that same department.  Mostly because I valued my relationship with BMO so little, I didn’t make the move that I should have.