In summary this is why I cashed out such a large amount of Ultimate Rewards:

On the negative side, sacrificing a million transferrable points of any kind is significant.  A million UR’s could be used for a lot of trips in business class overseas for me and/or others.  The cash out rate of just 1% isn’t great either.  It’s better than redeeming points for merchandise, but it’s also below what Amex offers via the Schwab Platinum card (at 1.25%).  However, I’ve earned all of my Chase points at a rate of at least 1.5x to 5x or more, so a lesser cash-out rate isn’t terribly troubling.

Also, Chase allows customers 30 days after a shutdown to redeem points.  Other banks like Barclays and Bank of America, cut off access after a shutdown to rewards immediately and customers have to fight to get them back (often via by filing a CFPB or via legal action).  By having a month grace period, cashing-out points “prematurely” isn’t really necessary.  In my case it’s just done for a desired outcome.

Many people that are fluent in all things Chase are familiar with how to redeem points for airline and hotel transfers, and to book travel.  Most people haven’t actually cashed in points for statement credits or cash that’s sent directly to a linked checking account.  In case you’re curious about the steps, here’s how it’s done:

After logging into Chase, select the account that has the points you want to use. To the right of your balance, and credit limit information you’ll see Ultimate Rewards displayed.  Click on “See Balance” and that will prompt the screen to change, show your points balance, and then select “Redeem”.

That will take you to the options for points redemptions.  Select “Cash Back”.

Once inside the Ultimate Rewards portion of the Chase website, select Cash Back as a redemption option.  A box will appear (below) asking either the dollar value you want as a cash outcome, or the points that you want to part ways with.  You can insert information into either box.  I chose to input information into the cash box. 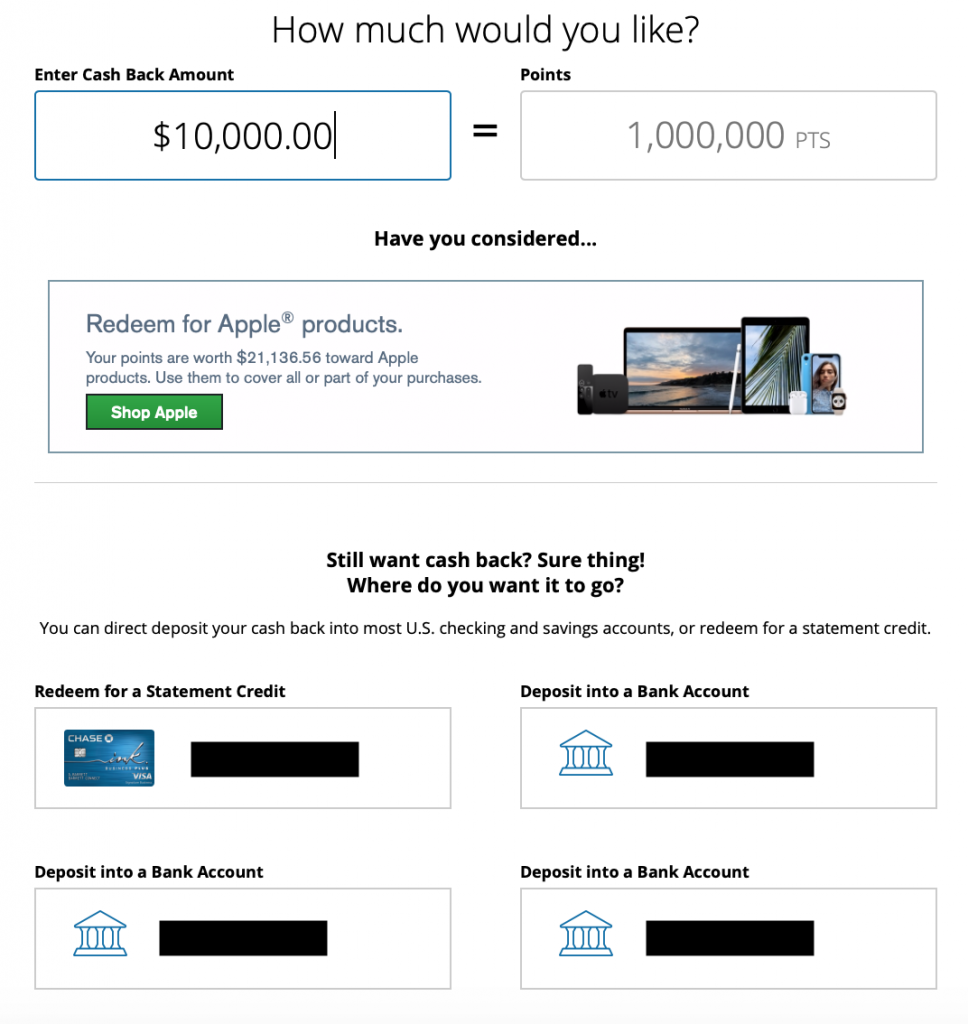 From there you can select where the money goes via any linked checking account for this card.  Transfers aren’t immediate (as I checked my bank account right after the transfer), but I assume I’ll see something next day.  Note that transfers are not reversible.  Once the button to transfer points to cash is submitted, it’s a done deal.  So far, no buyer’s remorse exists.

Chase’s front end screen that displays all of the credit card accounts isn’t my favorite, but the process of cashing out points is really simple and can easily be done in under a minute.  In this example, I made a choice for cash vs. future travel possibilities with a million Ultimate Rewards.  I’ll likely do so again in the near future too.  I’m not diminishing the value of Ultimate Rewards, but I do think Chase’s program is getting stale.  It needs a new transfer partner, higher points to cash-out rate option, or enhanced benefit that it’s currently not offering.  Chase points are still quite easily and plentiful, and I’m confident that I’ll get those million points back in a relatively short time.