Some more negative changes relating to manufactured spend (MS) have been circulating in the past few days, and may go into effect very soon at your local Walmart.  The current state of MS at Walmart varies considerably.  There’s a corporate money order policy that’s sent to stores across the country, yet each store has some leeway in determining what limits they impose on customers.  By limits, I mean if or how many, debit (gift) cards can be used and at what dollar limits.  Many stores have imposed 1 to 4 debit (gift) card swipe limits (amounting to $500 to $2,000), while others are allowing significantly over $10,000 (which oddly enough goes against Walmart corporate policy).  Some stores have stopped allowing prepaid debit (gift) cards altogether, even if they can only be used with a PIN.

The rumor that’s been circulating is that an internal Walmart memo is circulating that will impose a $1,000 maximum transaction limit to take effect on October 16th.  Or in other words, all of that bad news will go into effect next week – yikes.  Worse yet, for transacting amounts over $1k, the customer will be required to fill out a SAR (suspicious activity report).  To verify the information, I stopped by a local Walmart and talked with a service manager that I know well who confirmed and showed me the memo. 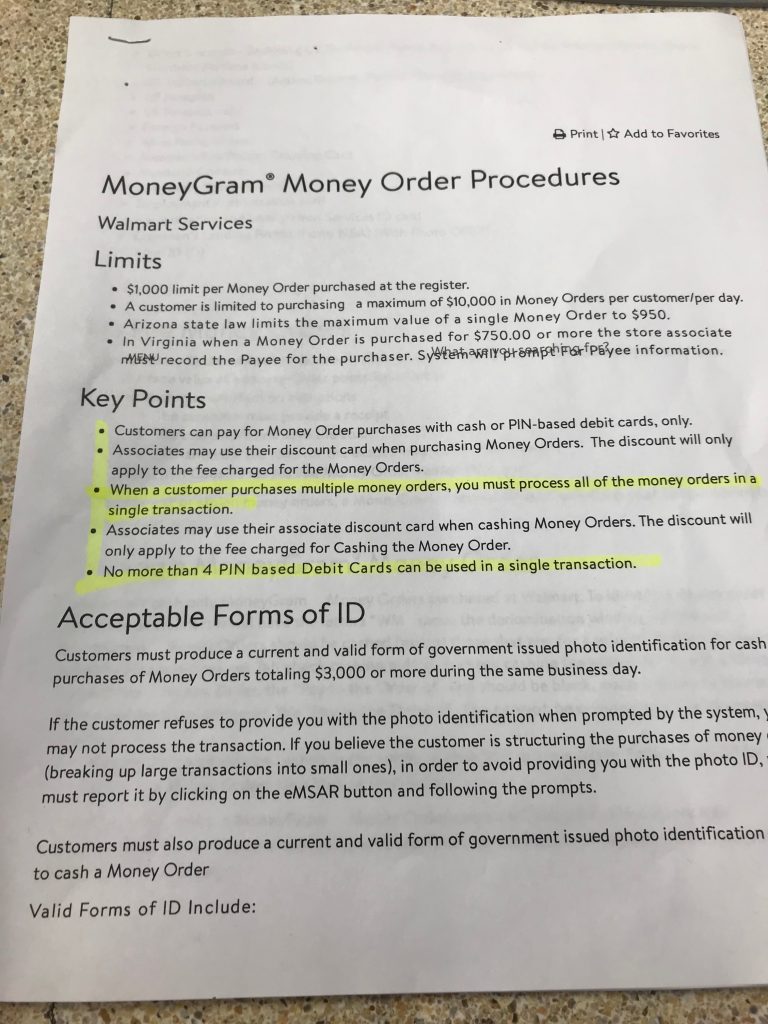 At first I thought the memo was a historical dagger, but then looked at the past 2 Policy memo’s that I had viewed and essentially saw the same language.  Here’s a memo from March, 2018. 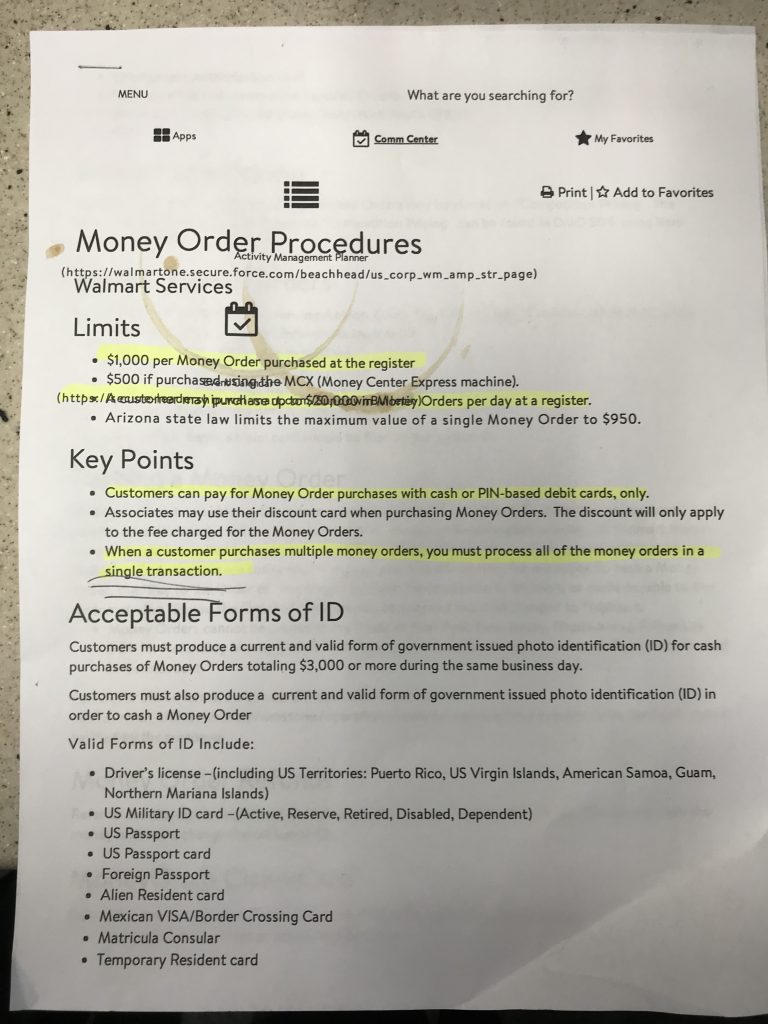 I can’t read the maximum amount of money orders allowed in this memo because it was printed over, but it appears to be either $20,000 or $10,000.  Here’s another recent Money Order Procedures memo that is very similar in language. 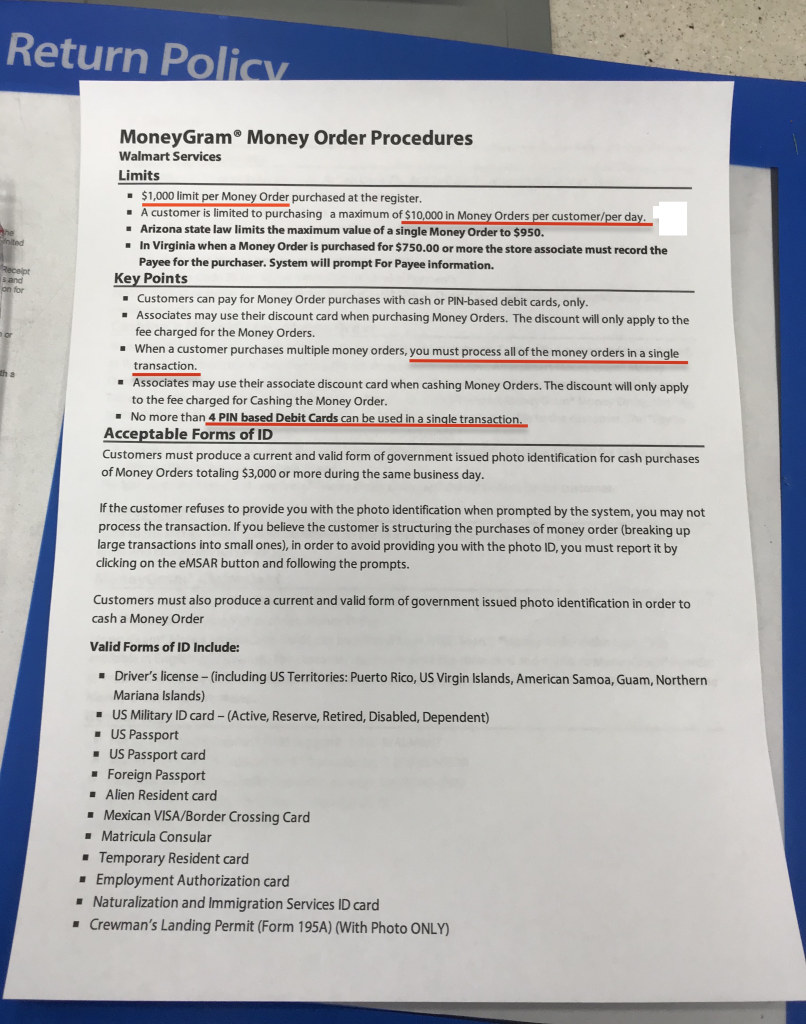 In other words and if the copy that was shared with me yesterday is accurate, the memo that’s currently circulating is a rehash of previous reminders that Walmart has issued.  The service manager last night told me that when he was trained in, Walmart told him that the money order fees were “pure profit” for the company, and that transacting them was great for the store.  That seems a little odd to me, but it’s his take.

Since this new memo appears to essentially be the same as previous versions from months ago, this news might not be quite as bad as I thought it would be.  However, the only bright spot that I see in this memo, as in the others, is that a store could opt to allow customers to transact more than $1,000 (or 4 swipes), and also allow multiple transactions.  That transgression is against the policy that is set forth by Walmart corporate, but it’s been violated by many stores around the country for a long time.  Unfortunately the verbiage on this new memo is already being implemented at stores in my local market, so I know it is already having negative effects!

It will take time to see how widespread the new ($1k) limit is imposed at stores not only in my local market, but nationwide.  The few data points I had yesterday weren’t promising.  In my area the $1k limit seems like the direction many stores are moving anyway.  In other stores around the country that are allowing major volume, I really wonder if this will force change on them too?  Only time will tell I guess.  Hopefully some doors are left open for people.  If you do have a stack of debit (gift) cards and needed motivation to liquidate them, consider this an electric prod.