Blogs
Home ▸ Points ▸ Flexperks for FIRE but not Cashing Out

Flexperks for FIRE but not Cashing Out

Like any currency, reward points and miles devalue over time.  Perhaps there is one, but I’m not aware of a single rewards currency that has actually appreciated over time.  With that said, in my 6th year of collecting travel rewards, I have developed healthy, but not grossly overweight, balances of various points and miles currencies.  Half the time I think I’m a rewards hoarder, and the other half I veto the thought.

When I first started collecting rewards, my first year goal was earning over a million points and miles in a single year.  At that time, it wasn’t that difficult to do, even though I wasn’t really aware of all the opportunities that were there.  For example, I wasn’t applying for several (or more) Bank of America (BoA) Alaska or Virgin Atlantic cards in a single day.  I also didn’t fully capitalize on the Citibank American Airlines cards that were like a broken slot machine that keeps ejecting quarters on every pull.  So for those of you who think you miss out on lots of deals, the truth is that everyone did at some point.

My new crush is FIRE (financial independence retire early).  The concept of heavy saving and thrift blend nicely with my general approach to life and early years backpacking overseas.  Like the goals that I create each year for travel rewards, I’ve created some aggressive ones around savings and retirement.  In short, I’m trying to improve my net worth by $100,000 from now until the end of 2020.  I have 15 months to accomplish that goal, and even though some of it’s market dependent, achieving it is definitely possible.  Much of that savings is from work and a reduction in monthly spend, with an additional portion coming from manufactured spend and the rest from cashing in points for positive cash flow.

Recently I cashed out million Chase Ultimate Rewards for $10,000 in cash.  That was an interesting experience.  I remember being afraid that such a large cash-out would put me in the cross hairs of a Chase shutdown, but the process seems to have gone just fine.  The vast majority of my Chase rewards were earned at 5x, even though the cash-out rate is only a 1% redemption rate.  Achieving multiples on that return from travel redemptions were possible, but my immediate interests and FIRE related demands took precedent.  I’m completely satisfied with that decision and am halfway to replenishing that stock of lost points.

Now I’m turning to U.S. Bank Flexperks as another source of cash.  I’ve been acquiring Flexperks for decades, although most of that time I wasn’t fully aware of my points or the program in general.  I’ve made mixed efforts to collect Flexperks.  Early on in my manufactured spend life, I was like a dog in heat that humped any leg it came into contact with.  I would MS any card in my wallet, regardless of the return or opportunity cost.  As foolish as it seems to me now, the U.S. Bank FlexPerks Travel Rewards Visa Signature Card was in that MS rotation for a stretch of time too.

To be fair to me though, back when I was occasionally MSing Flexperks, points could be redeemed for up to 2 cents per point via travel redemptions, so my efforts were not a total waste.  However the redemption rate changed in December 2017 when points became worth a standardized 1.5 cents per point (cpp).  Since that time, Flexperks don’t seem to be devaluing any time soon, but they are still an opportunity cost vs. cash.

For me, Flexperks redemptions (at 1.5 cpp) are very useful and competitive for cheap airfare, although not every cheap fare deal can be found on the travel portal where points can be redeemed.  Car rentals and hotels are far less competitive with the likes of Chase, even at just 1.25 cents per Ultimate Reward point.  Ultimate Rewards car and hotel redemptions of 1.5 cpp usually crush the comparative points that it takes from U.S. Bank for the exact same travel. 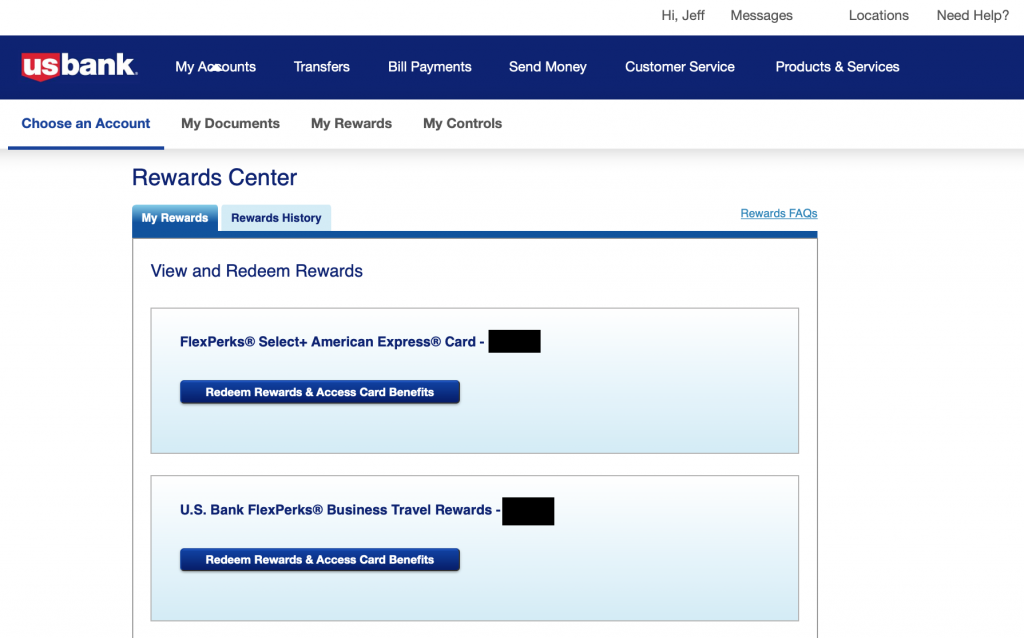 If you have more than one Flexperks earning rewards card, select the card that your points are connected with to redeem.

That scenario created a situation where holding onto a pile of Flexperks (300k+), didn’t make much sense.  If an “average” cheap flight redemption is around $500 that’s only 33,333 Flexperks, and I doubt I would ever book 1o consecutive cheap flight deals to drain my balance to zero any time soon.  In that way, just letting the points pile up seemed like a waste.  Flexperks at 1.5 cpp also only work with U.S. merchants, so that was another major downside. 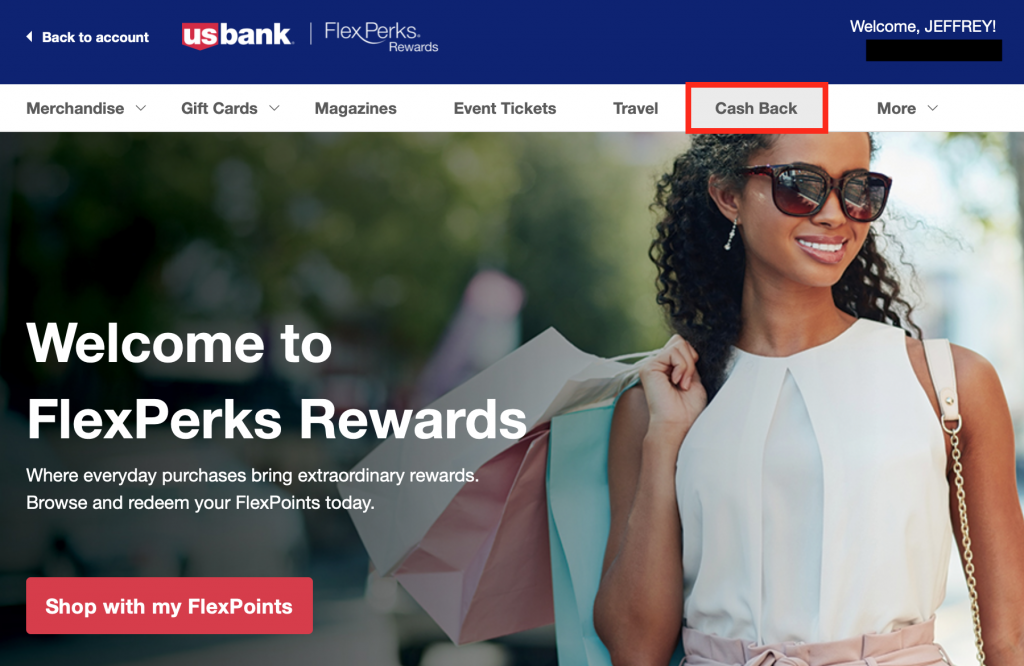 Select “Cash Back” as your redemption option

Another downside with Flexperks is that although U.S. Bank allows points to redeemed for travel via Real Time Rewards, there are minimum amounts that need to be met.  Only charges of $500 or more for lodging, and $250 or more for car rentals will trigger a 1.5 cpp redemption opportunity.  Even though I would mostly redeem Flexperks for flights, I didn’t like the minimums that U.S. Bank had put in place, mainly because I use these points on spur of the moment type travel.  Since virtually all of travel that I use Flexperks to book, not every travel redemption that I want to redeem points for would quality for the 1.5 cpp return.

Even with a total return being just over 1% (earning points at a little over 1x and cashing out at 1%), slimming down my balance has seemed like a reasonable play.  Perhaps even more importantly, if a U.S. Bank shutdown did occur (which it has for several of my friends), Flexperks are lost instantaneously and are unlikely to be recovered.  Filing CFPB (Consumer Financial Protection Bureau) report to try and recoup those lost rewards isn’t an alluring proposition.

Since my most recent (Citibank) shutdown, I’ve tried to redeem rewards more often that can be confiscated instantly upon shutdown.  If you are engaged in manufactured spending, it’s tempting to let your points balances grow and not cash out or redeem in some way.  At this stage, it’s probably important to point out that I lost over 100,000 Citibank Thank you rewards after my shutdown, and the same could happen to you if bowl in that same alleys that I do.  Unfortunately I’m not alone, as a good friend of mine lost over 700,000 Thank You Points on his shutdown this past year too. 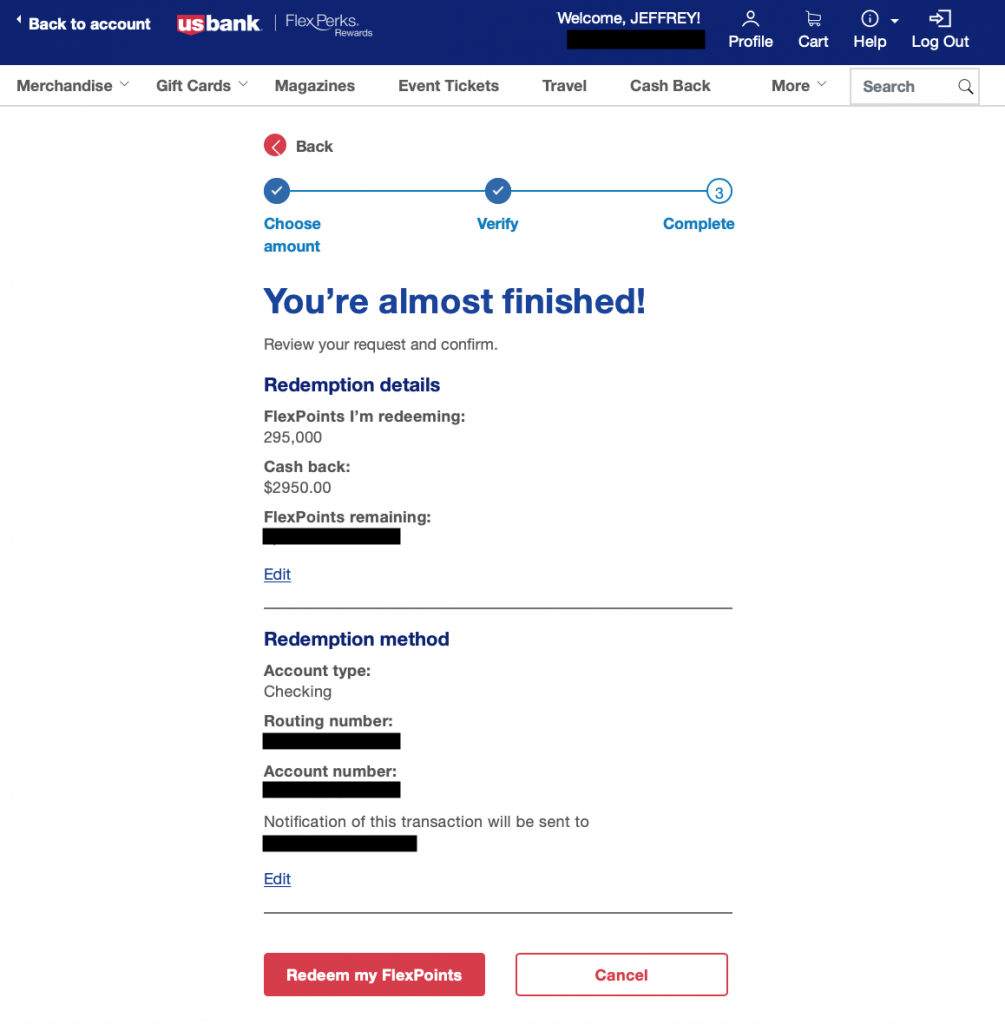 My Flexperks cash-out was mostly done in fear.  Fear that a shutdown could occur and my points would be confiscated, and fear that a growing points balance was a wasted opportunity cost.  At this point, I’d much rather have $3,000 in tax free cash that I can invest and grow than 300k in Flexperks Rewards.  I’m not planning on entirely exiting the Flexperks program though, as the tentative plan is to keep enough Flexperks on hand for a $500 or less travel redemption.  It’s not that $3,000 is a large amount or significant redemption windfall, but every little bit helps me reach my goals of financial independence (and hopefully) early retirement.