Volunteering in Europe for Ukraine

I don’t know what percent of the world knows that Russia invaded Ukraine, but I’d guess it’s pretty high.  I’m fortunate in that I’ve traveled through Europe extensively, as there was a period in my 20’s that I backpacked Europe for a year and have been back many times since then.  During those travels, I visited many of the former Soviet Union countries including Ukraine.  The collapse of the Soviet Union and Yugoslavia have always been really interesting to me.  Parts of Eastern Europe have a special place in my heart because they have suffered from a number of brutal external dictators/regimes throughout history with only brief periods of actual independence.  For example in some of the former Soviet occupied countries, they were invaded by the Natzis, only to later be overtaken and ruled by the Soviets.  After helping defeat the Natzis, Soviet armies were cheered in many parts of Eastern Europe as they rolled through towns and cities post-war. Unfortunately, their rule became as bad or worse than the Natzis for the people in those areas.  It was essentially one terrible regime after another.

The Covid pandemic has taken nearly all my desire to travel overseas out of my body.  Limited services, store closings and reduced operating hours, masks on planes, mandatory ‘vaccines’ to enter countries, and the risk of getting Covid while in a foreign country has made me toss in the international travel towel.  To be honest, and even though I do enjoy international travel, it hasn’t been that difficult.  I enjoy travel, but I don’t need it to be happy.  I figured somewhere around 2025 might be the time I’d venture overseas for a nice trip. The situation in Ukraine has compelled me to bump that timeline up.

Even though I’ve seen plenty of the after effects of war in some of the places that I’ve traveled, it’s difficult to imagine living in a town or city that is being shelled or is actively under siege.  I have friends who have fled Ukraine and also some who are also still living there, even while the war continues.  I helped one friend and her son who fled Ukraine to Lativa, get a job with an organization that I have some connections with.  I’m not sure how long she’ll stay, but she and her son are at least safe and doing well.  After reading about the war in Ukraine, listening to podcasts, and watching coverage of it on tv, I thought about how I could have more of an impact, then after some research, came across an article in the New York Times that detailed how to volunteer in Europe to benefit Ukraine.  Shortly after, I contacted the organizations listed in the Times piece about volunteering and received prompt responses.  Not along after that, I booked a flight (using cash from my plump United Travel Bank funds).  Now I’m here in Przemyśl (pronounced (pshaymish), Poland very near the border of Ukraine volunteering.

While in Poland I’m volunteering for a couple of different organizations.  The first one pays for train transport from Krakow, and also gives a small meal stipend and accommodation in Przemyśl.  It’s a small apartment with 4 people sharing about 700 or so square feet.  Not quite the Ritz Carlton, but it doesn’t both me at all.  The second organization is in Krakow and doesn’t provide any financial assistance or accommodation.  Using Radisson points is usually a good path in Krakow but they aren’t located very close to my volunteer locations, so I’m renting an Airbnb. 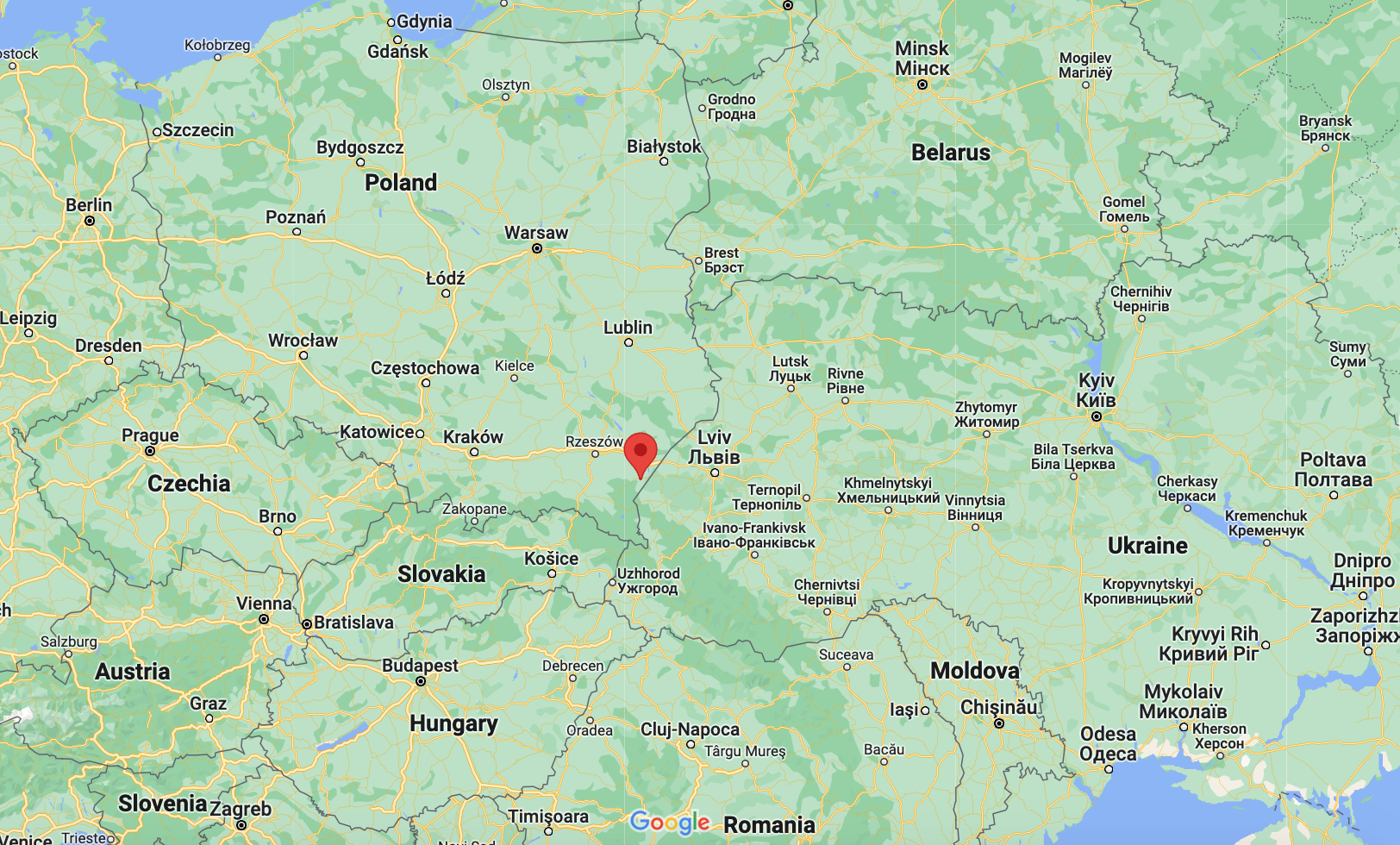 Przemyśl is located in the far SE portion of Poland, about 2.5 hours by train from Krakow, and just a few miles from the Ukraine border. As one woman on my train to Przemyśl said, it’s “where all the trains from Ukraine go”.

Przemyśl is a nice town with around 60,000 people, but seems a bit smaller.  Like many Polish towns, it has a beautiful center square, some surrounding hills, nice food, wonderful small shops and restaurants, and is about 2.5 hours from Krakow.  As the map shows, I’m just a few miles from Ukraine.  If I had more time in between volunteer stints I’d go into Ukraine, but I’ll be headed the other direction soon. 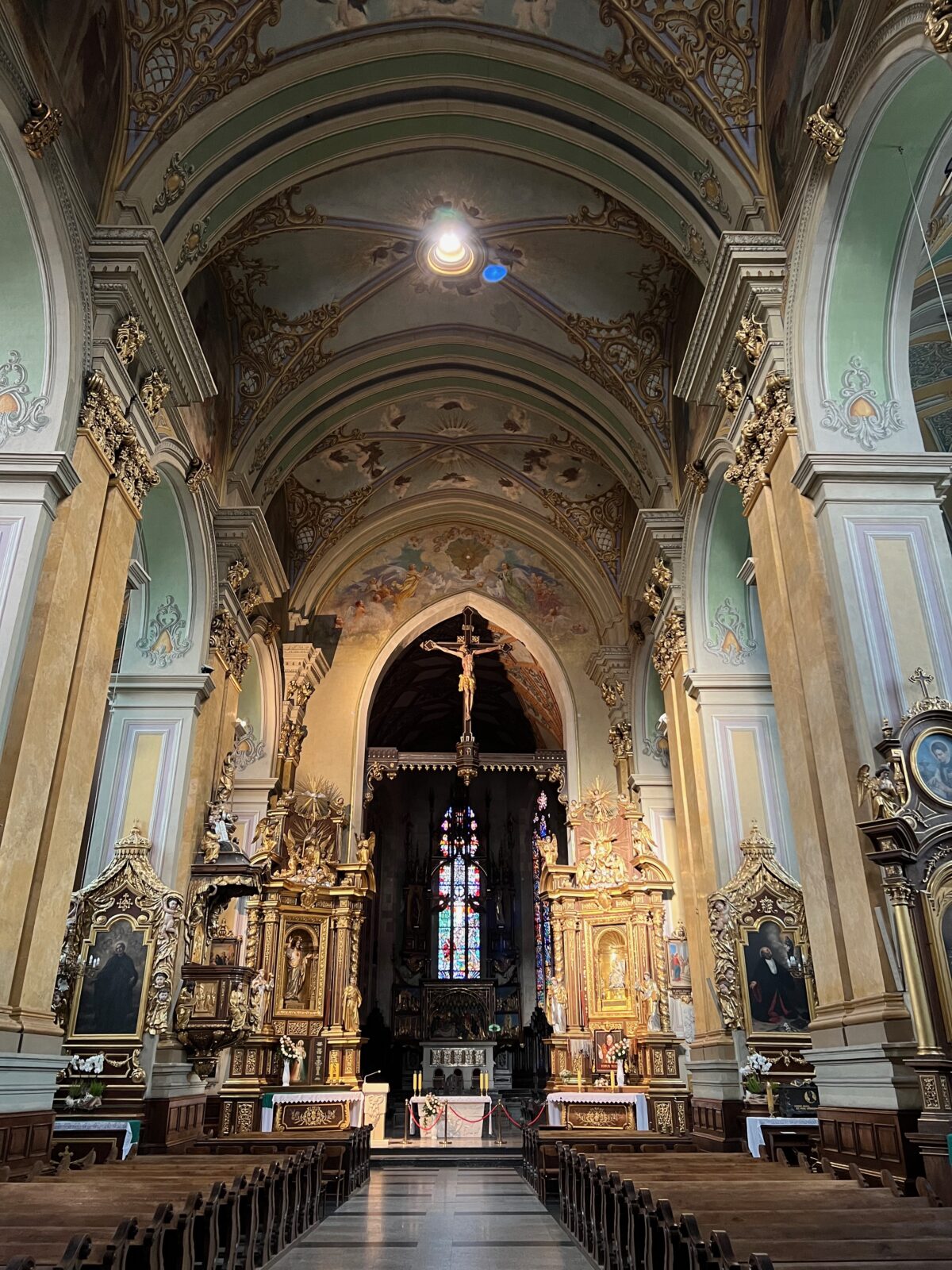 Even small towns in Europe have wonderful cathedrals.

The refugee center in Przemyśl and Krakow are similar in that they are in old shopping malls.  In Europe it’s common to have large supermarkets inside malls.  The malls are vacant and instead of stores, they are occupied by around a dozen aid organizations like UNICEF, Polish Red Cross, Alight, Soliterre, Medair, etc.  Each organization specializes in different things, so one group might provide psychiatric help, another short-term accommodation, others clothing, household supplies, etc.  The larger stores have cots and small twin beds.  Most of the people arriving are female with children.  There are some males, but most are female.  Husbands and fathers are usually back in Ukraine, fighting or dead from the war. 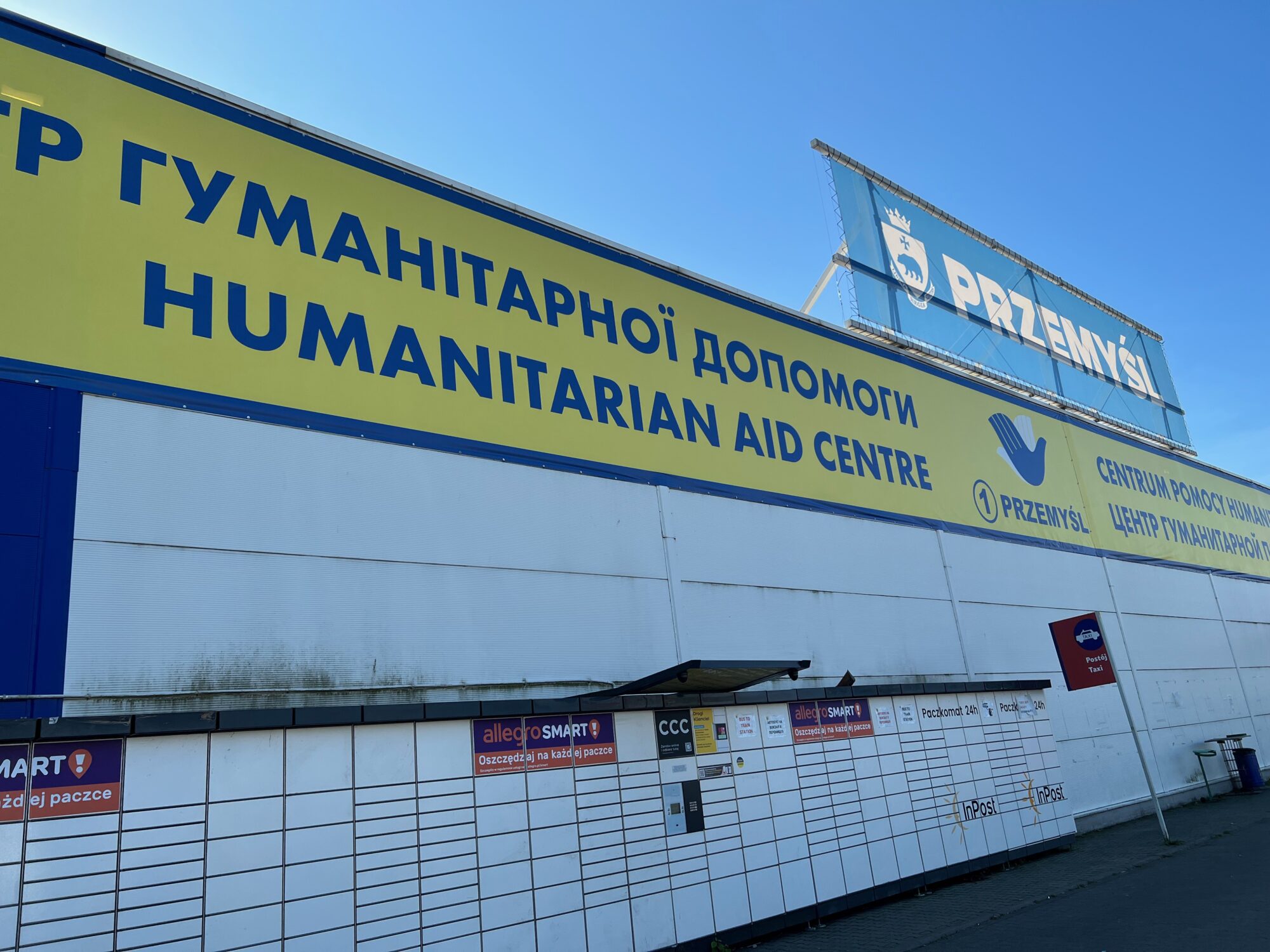 Outside the old Tesco shopping mall, now a humanitarian center for Ukraine refugees.

There are military guards inside the refugee center, and photos of it are not allowed – especially of kids and their families, which is totally understandable.  I volunteer everyday from 9:30 to 4:30.  The mall is 30 minutes walk from where I’m staying but the weather has been very good thus far.  Walking so much vs. driving is definitely been great, although tiring, and the lack of and constant barrage of news here has been a welcome change too.

The kids play area within the humanitarian center inside the mall. Not that big, but once the kids arrive it’s a pretty rocking place!

All of the children that I’ve seen and encountered are under 12 years old, although some teens do come through the refugee center too.  Early in the Russian invasion of Ukraine and during peak migration, there were 5,000-6,000+ refugee children and families being cared for each day in Przemyśl.  I was told that the Humanitarian center in the mall was designed to hold roughly 1,500 people, so there was a massive overflow. Kudos to all the volunteers and workers who cared for all those people.  I can’t imagine a 100 kids at one time in the children’s area that I work at.

Each day is a little different, as you don’t know how many kids or people will come through the doors and need help.  We typically have 4 volunteers per day and are averaging around 20-30 kids a day at our facility.  That may not sound like much, but it’s a small area (maybe 900 sq. feet) that also has 4 bikes.  The bikes are very popular (even though one is missing a pedal) and create a ring of chaos for other kids playing on the same side of the divided space.  We all do a lot of painting, drawing, frisbee, soccer, board games, playing house, and normal things that you’d do with children. I even met up with a local magician to try and learn some magic before leaving.  On the train ride from Krakow to Przemyśl I saw across from a 4 year old boy from Ukraine and his mother.  I showed him my magic tricks, gave him some new crayons and markers along the way.  He ran up to me and gave me a hug before getting off the train.  That was pretty cool.

Some kids have been traumatized pretty badly from the war so some thoughtfulness is needed.  Balloons are not allowed as they are loud and can sound like a gun when popped.  Army/military and weapon toys aren’t permitted either.  There are two tv’s but only one works.  Many of board games are missing pieces.  There was a guitar and electric piano instrument, but they both broke recently.  As many of you know, toys in the hands of kids have a pretty short shelf life!  Before leaving to volunteer, I managed to raise some money on a GoFundMe, and also have a bunch of school supplies donated.  Hauling an extra 50+ pounds of toys and school supplies with all the way here wasn’t ideal.  I’d just buy them here next time as that extra weight took it’s toll on the way here.  Since being here, I’ve purchased a good amount of things for the kids and plan to buy more tomorrow.  It’s a nice feeling to see the kids happy before they have to leave on their next train – even if we have just 1-2 days together.

Most of the kids are very nice.  Some are absolute angels, but there have been a couple of boys pass through who as adept at violence as Picasso was at painting.  Young boys can be aggressive yes but with these guys, you might see one of them just walk up and slug another kid in the face.  Most of the issues have been with the Roma kids. Fortunately though most of the children have been very good.

Seeing the inner workings of humanitarian relief for a large group of people has been interesting.  Combined with the time change, the work has been pretty tiring, but still enjoyable.  If Ukraine pulls through the war and “wins”, whatever that might mean, they will have plenty of issues like rebuilding, loans, and a mass of land mines land mines scattered around Ukrainian farm fields by the wonderful Russian army.  An American guy is actually volunteering to clear them by hand.  He’s a real hero for what he’s done and will be doing more of in the near future.  One of the reasons I like this regions so much is because of the dynamic history and that the people have been through so much but continue to push forward.  Unfortunately they will have to keep fighting, this isn’t close to over yet.