Why I Don’t Resell Gift Cards

I used to do some reselling on The Plastic Merchant (TPM) in the last couple of years, but have stopped doing so.  If I remember correctly, my reselling amounts weren’t heavy by any means, somewhere in the $5,000 to $10,000 per month range.  Even though I’m in semi-retirement from gift card reselling, it’s still a good way for most people to earn points en masse.  For beginners that think about, but who aren’t comfortable with, manufactured spend, I think reselling is probably a better path to pursue.  When I say gift cards, think major retail stores like Best Buy, Nike, Apple, and others (not Visa debit/gift cards).  I recently wrote a post about the 88 Ways to Earn Miles and Points, and in it, talked about reselling as a great way to bank more rewards.

Reselling gift cards is often best during the late fall/early winter before Christmas.  After Christmas though, the market can be flooded with cards so unloading certain brands may be more difficult directly after the Holidays.  There are many reselling groups on Slack, Facebook, local meet-ups, and other resources that provide intel about current and upcoming opportunities.

Reselling gift cards is nice because it’s an extremely reliable way to earn points at a high rate without cost (and possibly profit).  For example, in TPM’s website, if there’s a deal at store X that you like, you can reserve selling space (or put a quantity of cards to sell on old) even before you have bough the cards.  Making a reservation to sell is kind of like holding your place in line, and walking off to get a hot dog then coming back into line at the same place.  The reservation also locks in your rate that you will be paid for the cards.  So if you find a rate that allows you to break even or make 1%-2% then you can reserve that in the selling queue.

You don’t have to rush out to a store, and hope that when you get back you’ll still have that same rate that was posted before you left.  You’ve already secured your rate/deal, and can shop at will that evening.  If I’m not mistaken, deal reservations on TPM for 24 hours.  So in the case of TPM, the two things that worry most people about reselling something, the price, and ability to sell, are locked in even before cards are in hand.  Those aspects are huge and take much of the stress away from what could be a painful process.

It’s also easy to know what cards are accepted for resale what amounts.  TPM will have a page will have a sellers page with the cards listed vertically, the amounts that can be sold, the inventory that they are accepting (number of $ worth of cards), and rates they are paying.  So you can compare any current deal immediately to what you’d be paid.  Once you’re logged in, it literally takes a seconds to a minute to figure out if you’ll make or loose money on a potential resale.

It’s important to note that reselling can also be a business, especially if you’re making a profit.  Reselling opens up opportunities for business rewards cards, which in itself can be incredibly valuable.  Don’t forget to consider that angle.

Reselling is also a nice primer for manufactured spend.  It’s not the same, but relatable.  By getting involved in reselling, manufactured spend concepts and deals might become more clear, as well as a great way to diversify your points earnings, and overall knowledge base.  Also, depending on where you live, manufactured spending might be difficult or not possible at all, while reselling could be since you’re liquidating on the internet, not in a physical store or location.

Float times, or the time between when you buy your cards and when you are paid for the resale, can be a compelling reason not to resell, at least at larger volumes.  For people doing hundreds or a few thousand dollars worth of reselling a month, a few weeks of float time probably isn’t much of an issue for them.  But for those invested the tens or hundreds of thousands of dollars a month range, that means large cash outlays and tight bank account management in order to keep your accounts in good standing.  With the recent news of Chase shutdowns happening at higher than normal rates, many of which seem linked with high credit utilization, float time in reselling could be a danger to keeping that relationship afloat.

Reselling websites also may have restrictions on the types of gift cards that they allow to be sold.  For example, if you have a $100 Best Buy card that you bought and used but that still has $67.53, sites like The Plastic Merchant won’t allow you to resell that item.  Only the original and unused card.

The biggest downside (besides the float) to reselling for most people right now, is the wait list.  TPG has been pretty notorious of late for turning away new people wanting to get in and not allowing expired accounts back in.  I’m not sure what TPM’s current number of resellers is, and what number they are hoping to cap membership at.  Just know that even if you want to resell, some sites may turn you away.

There’s a danger, although probably a small one, of being stuck with the gift cards if a reselling website shuts down.  If you have $1,000 worth of gift cards that you’re trying to sell and the resale site goes belly up before they send out checks, you probably aren’t going to get your money.  It’s not a likely event, but it has happened.

The process of reselling can be less than desirable too.  For those of you who haven’t sold gift cards before, after you purchase the cards and depending on what website you resell through, which I’ll briefly explain below.

Generally, a good reselling deal will work like this:  let’s say Nike is having a 15% off sale on gift cards.  Those gift cards might be on sale directly at Nike stores, online, or at another store that sells Nike gift cards.  For now let’s say that a local supermarket is the store with the promotion.  On one of the major reselling websites, they are offering buy rates for Nike cards at 86%.  You bought your cards at 85% (or 15% off of 100%), so you’re actually making a profit of 1% on the deal.

A kicker or added bonus in this deal might be using a rewards card that earns a category bonus at supermarkets.  So if you buy $1,000 worth of Nike gift cards, you might receive 2x or 3x points (or 2% – 3% cash back) for that purchase.  There also is the possibility of a tie in with fuel or store rewards from the purchase too depending on the supermarkets policies and rewards restrictions.  So in this case, you’re at least doubling up on points earned and actually making a bit of money in the process.  The best part is that risk is essentially eliminated, as you’ve secured a sales point to sell your cards at before buying them. 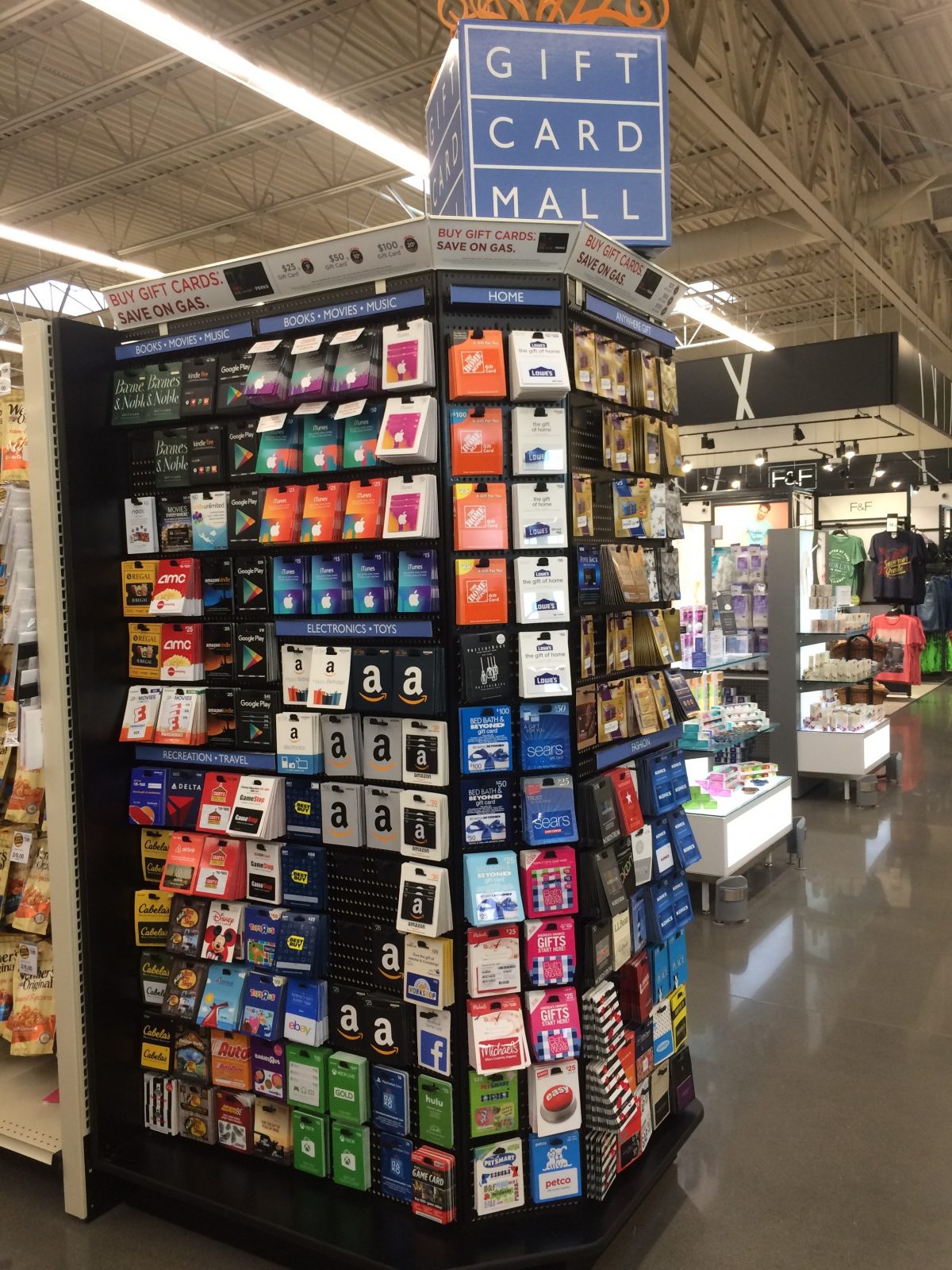 After purchasing your cards, and depending on which website you resell through, you’ll probably have to take photos of the card numbers and store receipt(s), upload those photos to the website, and organize each transaction on your end, and then wait to get paid.  The average float time for me selling through TPM was in the 2-3 week range, which I wasn’t crazy about, but which also wasn’t avoidable.  I assume the payouts are coming quicker now for TPM’s resellers, but I don’t know that for sure.  Reselling websites usually give a few different options to their resellers for payment options.  I chose to have a physical check sent to my address, and had no issues with mailed checks.

As a side note, reselling for profit would technically be considered income.  If you do a decent amount of reselling or see substantial profit from those activities, I’d recommend claiming that income on your taxes.  I’m not a tax professional, but the tax issue is something to consider.

The big reselling websites are The Plastic Merchant, Raise, Cardpool, Cardcash, Saveya, GiftCardZen, and eBay.  In terms of supporting people in the points hobby, The Plastic Merchant is the best.  The company’s founder Mike, started off in the points hobby then progressed into reselling to earn more rewards and profit.  He understands the ins and outs of people trying to amass points and travel rewards, and also sends out emails /notices alerting his buyers that deals are on the way.  There’s even some language on the site that talks about the link between their company and points and miles enthusiasts.  DoctorofCredit has a nice post on reselling that’s worth checking out too.

Why I’m Not Reselling (Gift Cards)

I’m still very open to reselling as a means to creating more points and miles, however the main reasons why I’m not involved in it are

1) I can’t get back into TPM (my membership expired), and

2) I don’t have a strong interest at this point.

The float is too long (period between when you pay for your cards and when you receive money back from the reselling website), and there’s a fair amount of work involved in the process.  Running around to get the cards, taking photos, having piles of cards and receipts laying around, was all slowly taking away my reselling mojo.

After  attending and speaking at FTU (Frequent Traveler University) in Minneapolis last summer, I wanted to get back into reselling, and was committed to doing more volume.  I was thinking of $50,000 to $100,000 a month worth, which for some may not be much, but for others might sound like a ton.  I got to know the people involved with TPM at FTU, interviewed Mike (the owner and founder), and even had beers with him and some of his staff during the event.  But after FTU, I tried logging in and found out that my account had been closed due to inactivity.  I contacted TPM and explained the situation, asked that my account be reinstated, and hoped for the best.  I received a response from TPM a few days later basically saying “thanks, but things are changing so stay tuned”.  It wasn’t a no, but it definitely wasn’t a yes either.  So basically I lost most of my interest.

Fortunately, getting shunned from TPM was kind of a blessing as I more than made up the difference on some other deals in the latter half of 2017 that had much smaller float times that were able to create both profit and points, which was pretty amazing.  December 2017 was my biggest point month ever, and may have not been if I was reselling because of the resources I’d need to allocate to the float and process in general.  Reselling is in the back of my mind, but I’m not sure what path I’ll take if I do get back into it.

In the end I’m still very pro-reselling (gift cards), even though the TPM thing seem to go south for me for whatever reason.  I’m not bitter about TPM, just puzzled about how things dissolved.  I’ve tapped out of reselling for now, but who knows what the future will hold.  If you haven’t tried reselling, and are new to the hobby, looking to try something new, or need a business idea for new rewards cards, you may want to consider reselling gift cards.