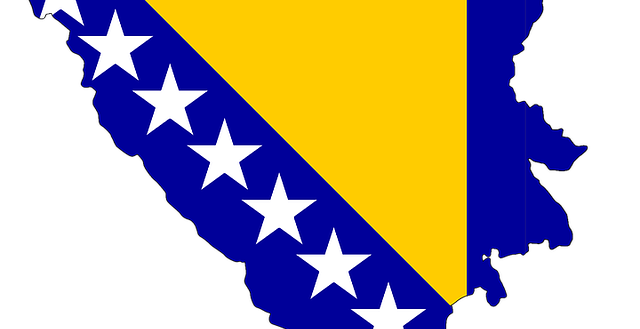 In over 30 countries of travel in Europe, one country that had a profound impact on me was Bosnia and Herzegovina.  People often ask me what is my favorite country that I’ve traveled too.  I don’t have a favorite country yet, but one that I’ll never forget is Bosnia.  Bosnia is a relatively small country that lies east of Italy in what was the former country of Yugoslavia.  The capital, Sarajevo, hosted the 1984 Winter Olympics, and was hailed as an shining example of multiculturalism and tolerance.  The reason for the vaunted reputation was from the fact that three major groups of people, ethnic Serbs (Serbian Orthodox), Bosnian Muslims, and Croatian Catholics lived there in peace and harmony.

In 1990, Yugoslavia began to break apart.  First Slovenia declared independence, then Croatia and Bosnia followed suit.  The fracturing of the country was controversial and complicated, if not technically illegal, and created a huge rift within the country and amongst the people.  Soon after Slovenia declared independence, protests started, violence commenced and war broke out.  Over the course of the war, roughly 250,000 people were killed, entire towns were destroyed, and the world largely sat by and watched.

“Instead of learning to fight evil, Germany has learned that fighting is evil” – Dennis Prager 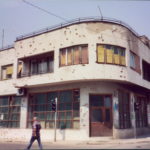 Europe often talks about the importance of human rights and peace throughout the world, but when the conflict took place in its backyard, it remained silent.  The major military powers in Europe could have intervened and in all likelihood, stopped the fighting.  Yet the war went untouched by outside forces for 5 years.  While the fighting raged on, Europe’s elite did what they normally do, hold conferences and and talk about how horrible the war was, drink tea, and talk some more.  The U.S. also went years without taking a firm stand.  Finally in 1999, lead by the U.S., NATO bombed Serbia’s capital city Belgrade, and the war ended soon after.

In 2003 I took buses throughout Slovenia, Croatia, Bosnia and Serbia and could clearly see the devastation from the war that ended 8 years before.  Throughout Bosnia I could see many hundreds of houses in the countryside that were uninhabited and burned out even 8 years after the war had officially ended.  Some towns would have would have large rocket propelled grenade holes and scattered bullet marks in the walls above coffee shops, retail shops, and other buildings.   Many thousands of land mines are still buried in the forests and once pristine landscape around the country too. 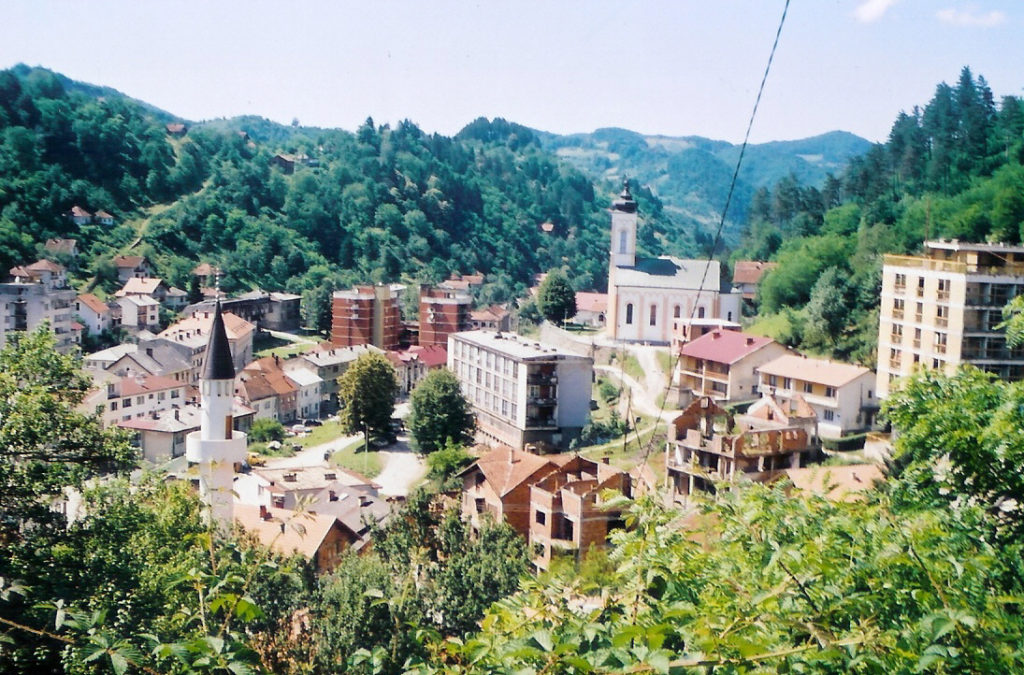 Srebrenica lies in the very NE part of Bosnia, very near the Serbian border.  It’s a beautiful and picturesque town of around two to five thousand inhabitants (depending on what areas around the town that you include in the figure), nestled between small forested mountains with a river flowing through town.

“The Secretariat building in New York has 38 stories. If it lost ten stories, it wouldn’t make a bit of difference” – Former United States Ambassador to the United Nations, John Bolton

During the war the United Nations (U.N.) designated several safe zones, or areas where civilians could go for protection, food, and shelter.  Dutch UN troops staffed most of these locations, but were not given orders to actually defend the civilians if push came to shove.  One day the Serbian army rolled up to the outskirts of Srebrenica, led by general Ratko Mladic, and without a shot fired, strolled into town, overtaking it and the U.N. peacekeepers, who were little more than human mannequins with rifles.  Talks and “negotiations” between the Dutch captain and Mladic took place, but the U.N. was in no position of authority.  Srebrenica was under siege and under complete control of the Serbs. 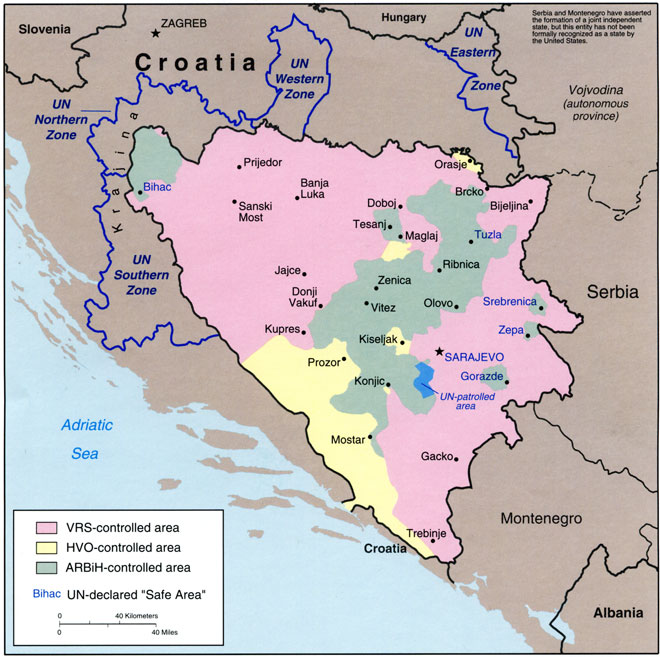 Areas of control during Balkan War

The UN Forces were greatly outnumbered, outgunned, and lacked the mandate and support from the U.N. hierarchy to engage an adversary if they needed.  So when the Serbian tanks and troops strolled into town, the U.N. forces surrendered without a shot fired.  Beyond the physical damage inflicted to Srebrenica’s infrastructure, it’s the site of the largest mass slaughter in Europe since the Holocaust.

Thousands of refugees that had gathered outside of town at the U.N. base just outside Srebrenica, in Potocari, for protection, food, and help.  The Serbs seized the area, separated men, women, and children and transported them to pre-designated areas.  The captives were told that males would be moved to a separate camp, but in reality they were brought to different remote areas to be killed.  Often the men were lined up in front of large dug out pits, shot, then buried en masse.  Over 7,000 people, almost all men and boys, were killed by Serb forces.

There are still tens of thousands, if not hundreds of thousands, of land mines throughout the former Yugoslavia which are still being taken out by hand.  It’s a laborious and dangerous occupation but pays well.  When I first crossed the boarder of Croatia/Bosnia, I met a college aged girl who offered to give me a tour of her town.  Shortly into our walk I began walking across a grassy area in the direction that we were going and she grabbed me arm and pulled me back onto the cement.  When I asked what was wrong, she replied that the grassy spaces weren’t completely cleared of land mines yet and some places were still dangerous.  It was a jarring experience, and even when I returned to the US from Bosnia I still had trepidation for a couple of weeks about land mines and grassy areas. 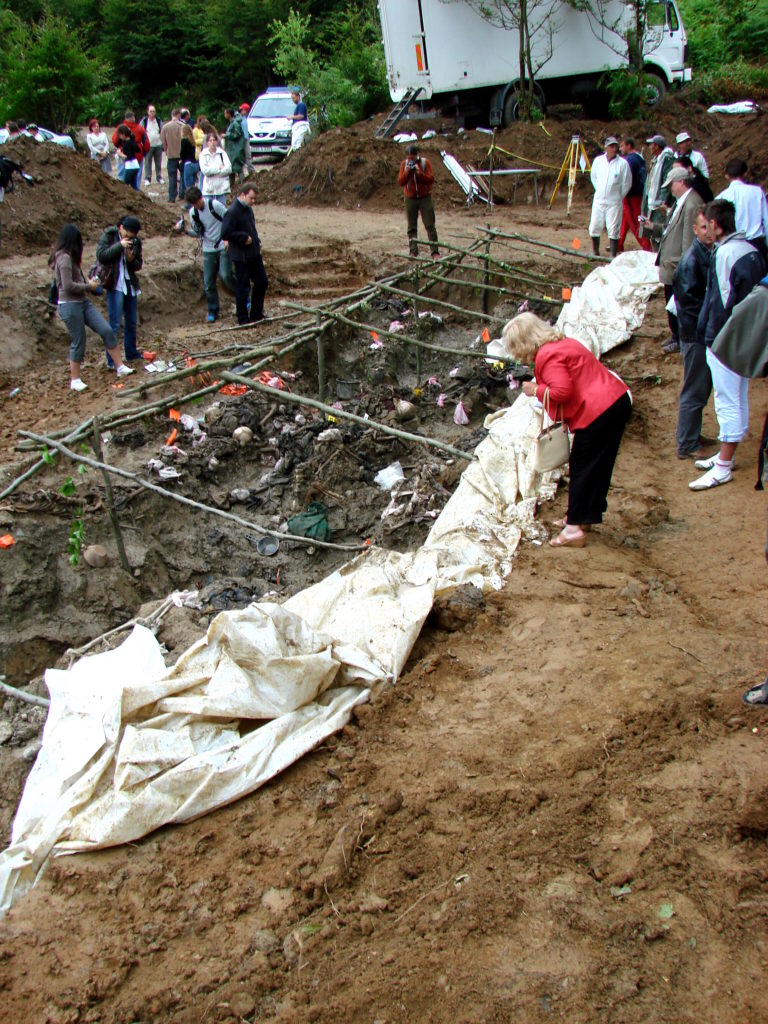 Walking in the town, I noticed how few men there were in Srebrenica, and the ones that were there probably were Serbs who took over empty houses in town after the war.  Almost all the Bosnian men in the village were killed or died during the war.  One survivor’s story can be seen here as well as a good piece from the BBC shedding light on the war’s toll.  Workers are still excavating bodies from the region too.  As recent as July 2015, more bodies near Srebrenica were found and excavated.  For further reading about Srebrenica and to see a collection of photos of the war there, the Atlantic has a nice piece here.

While in Srebrenica, I stayed with a man that was in line to be brought outside the town on buses with the others and killed, but the Dutch officer in charge made a plea with the Serb forces on his behalf, claiming that he was their translator and cook.  He was spared and taken out of line while his relatives, neighbors and friends were loaded onto the buses and later killed.  His name is Abdullah, and he still owns a restaurant on the edge of town, and rents out a few rooms above his restaurant.  I would walk the town and stop back during the afternoons where I would find him sitting alone at one of his small tables in the restaurant, head down, smoking, emotionless.

The war can be a very touchy subject to those who live in the region.  Opinions vary greatly about who caused and did what, the international community’s role, and what will happen going forward.  I walked through the streets of Serbia’s capital Belgrade after the war and saw a small retail stand with photos of Radko Mladic for sale.  Mladic was the Serb commander during the war who invaded Srebrenica and who later underwent trial at the U.N. for war crimes relating to genocide and mass murder.  I asked the salesman if he Mladic was popular in Serbia.  He gave a big smile and said “Yes, he is a hero”.  Similar affection is given to Stalin throughout Russia and Mao in China.  It reminded me of the saying that one man’s terrorist is another man’s freedom fighter.

Many Serbs also hold dear the fact that war crimes were committed from Bosnian and Croatian fighters against ethnic Serbs too.  Although that is true, it was almost never reported by the Western media.  The media has created winners and losers in the Balkan war, even though both sides suffered and committed atrocities.  But the committed atrocities were larger for the Serbs and most importantly, they lost the war.  Those that loose wars are at the discretion of those who win.

I met a man in Sarajevo during my trip there that said while the US and Nato intervened much too late, he was grateful to the Americans for stepping up the pressure.  He told me “if the American’s didn’t act, we would still be fighting today”.  His house was shelled and still had bullet holes on the outers walls and he knew many people who died in the fighting.  For those of you who think the US should withdraw from word affairs and conflicts, his words are something to consider.  Bosnia is a beautiful country with hills, rivers and towns.  It was once the pride of multiculturalism in Europe.  But as I get older and continue to travel, it doesn’t take much for evil to appear anywhere.  Bosnia and Srebrenica just happens to be one of the most recent examples.